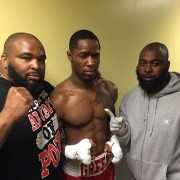 New York, NY, June 3, 2015 (Newswire.com) - It was a busy month of May for middleweight prospect Ian Green.  Some might say maintaining a grueling training regimen in his quest to become the middleweight champion of the world is enough to keep this 21 year old phenom busy.  Not Ian!

Ian’s life outside the ring is equally important to him.  The month of May marked Ian’s completion of his first semester at Passaic County Community College where he is pursuing a degree in business.  He proudly finished this semester with a 3.0 grade point average.  In the midst of his training and studies Ian still devotes his Monday and Friday mornings to the senior citizens of his home city of Paterson, NJ where he volunteers at the Department of Senior Services.

Ian’s life and his commitment to his community sparked the interest of the ABC television show “Sports Stars of Tomorrow.”  The shows producer and crew visited Ian at his gym on May 13th and he will be the first boxer to ever be featured on the show when the segment airs later this summer.

The Young General finished up the month of May with his fifth professional fight.  Green, 5(4)-0-0 scored an impressive TKO victory over a game Bruce Runkle (5-6-1) on Saturday May 22nd at the Wheeling Island Casino in Wheeling, West Virginia.  Green attacked Runkle’s body in round one before unleashing a vicious attack to the head in round number two.  Green sent his opponent to the canvass with a devastating overhand right.

Jason Umlah, General Partner of Green’s management team, Kran Sports and Entertainment Management, commented that “Runkle went down with the force of a heavyweight.”

A wobbly Runkle staggered to his feet but the referee mercifully stopped the fight at 1:09 of the second round.  Green said after the fight he was able to identify his opponent’s mistakes and he “made him pay for them.”  Green’s trainer Dwyke Flemmings was very pleased with his young fighter’s performance.  Flemmings said after the fight, “The scary thing about Ian is that he has tremendous power in his left hook and overhand right.  Ian doesn’t yet appreciate how strong he is.”

"Young General" Stops Undefeated Khiary Gray, Reports Kran Sports and Entertainment Management
Making his television debut before an enthusiastic crowd on the ShoBox telecast on July 22, 2016 Ian Green delivered a crushing right hand to the chin of his undefeated opponent in the second round. The fight was all but over at that point as Gray stumbled to his feet and tried to go on. The "Young General" jumped on Gray and the referee mercifully stopped the fight with just seconds remaining in round two. The crowd at the Foxwoods Resort was stunned and surprised. Green was not!
Kran Sports and Entertainment Management - Aug 2, 2016

Catching Up With Ian Green (By Todd Creel)
On Saturday November 14th 2015, I had the pleasure of attending a Jeter Promotions card featuring many up and coming pugilists. Among them, "Young General" Ian Green won his bout in impressive fashion with a first round knockout. While his opponent was nowhere near world quality, Ian showed impressive skills.
Kran Sports and Entertainment Management - Nov 25, 2015

Ian Green Impressive Again; Moves to 7-0
The "Young General" Ian Green improved his professional record to 7-0 with 5 KO's on Saturday September 26, 2015. Fighting on the H.I.T.M card in Beach Haven, NJ Green took on K Lon Spencer in the much anticipated "Boxing by the Beach" event. The "Young General" did not disappoint his loyal fans who flooded the venue wearing their red "Young General" T-shirts which were provided by PG Sports.
Kran Sports and Entertainment Management - Sep 30, 2015