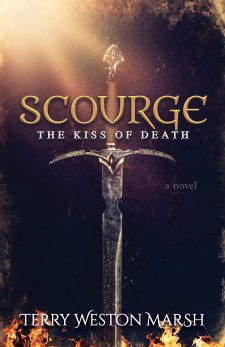 NEW YORK, August 24, 2021 (Newswire.com) - Morgan James' new release, Scourge: The Kiss of Death, by Terry Weston Marsh, is a medieval adventure novel for young adults that follows the journey of a young peasant who must battle a murderous tyrant and a deadly plague to save the woman he loves.

Geoffrey, a young man of noble birth, is horribly disfigured as a child the night his parents are murdered. Raised by a peasant family and on the verge of starvation, Geoffrey decides to reclaim his inheritance—setting him on a dangerous path of terrible secrets and bitter betrayal—as he fights to save himself, his country, and his beloved.

An exciting coming-of-age novel, Scourge shows young people that courage and self-reliance are the true ingredients for success—not sorcery or superpowers. Scourge honestly explores the challenges of being different in a world that prizes conformity, fostering the concept of self-acceptance and reminding young adults to be true to themselves.

Terry Weston Marsh brings Scourge to life both as a seasoned storyteller in the world of film and as a physician who dealt with contagious diseases. As a filmmaker, Terry's writings have garnered several regional Emmy nominations. His recent short films ("Rosie's Rescue" and "Red Red Rose") have also netted numerous awards. He was tapped by iconic artist Bob Ross to write a children's TV program ("The Adventures of Elmer & Friends") prior to Bob's untimely passing. Terry and his wife, Tacy, reside in Mooreland, Indiana.

More About This Title: