Rock musician/songwriter Chris Holly cries out "We will not be orphans of the American Dream" in new campaign song for Republican nominee Donald J. Trump. 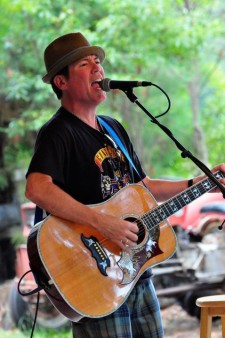 Charleston, South Carolina, September 26, 2016 (Newswire.com) - Rock & Roll journeyman Chris Holly has shared world stages with everyone from speed metal band OMEN to Hootie and the Blowfish, Mike Nesmith (Monkees) and even US Senator Tim Scott (R-SC) just to name a few, but now Holly has released a new song dedicated to Mr. Donald J. Trump and his campaign.

With drums a blaze and guitars firing "American Dream" has captured the pulse of many voters in this election, Holly lyrically ask them to "Stand, Fight, Don't Back Down" he also proclaims "One by land, two by sea, we're orphans of the American Dream."

Chris Holly will be joining Team Trump at upcoming events scheduled in North Carolina. Holly said, "On November 8th, together united we will save the American Dream, remember every vote counts, it's your voice use it."

About Music Is Life

Be What You Dream - Have Guitar Will Travel - Music Is Life

There is One Singer That Would Love to Perform at Trump Inauguration
Singer-songwriter Chris Holly hopes to rock DC January 20th
Music Is Life - Jan 9, 2017