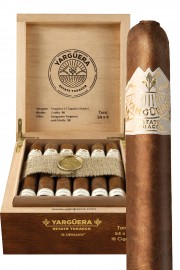 Fort Lauderdale, Fla., March 24, 2016 (Newswire.com) - Hybridization, innovation and passion are key ingredients in producing something special. Tucked between two mountains in Honduras sits a tobacco farm named Yargüera. From this farm, surrounded by history, comes a revelation from the earth called Yargüera. Yargüera is a new hybrid tobacco seed and will be leading the next wave of Honduran tobaccos and cigars for years to come.

In the 1960’s, the Arias Family traveled to Cuba in search of an exquisite tobacco seed. Brought back to their homeland, Honduras, the Arias family cultivated the sweet-tasting and aromatic tobacco for decades, though it was a delicate and challenging crop.

To reinvigorate the seed, skilled agronomists from the Grupo de Maestros began a project to combine its delicious flavors and aromas with the heartier and more robust Criollo’98 seed. After years of careful effort, they created a tobacco that contained the best qualities of each. At the end of 2013, the new seed was planted at the Yargüera farm – a landmark this new, estate-grown tobacco honors with its name.

Yargüera tobacco, exclusive to Altadis U.S.A. wanted to trace the Yargüera seed’s heritage to a brand of the same high caliber in Altadis U.S.A.’s family.

“We are thrilled to announce Yargüera H. Upmann, as the first project for this Honduran Estate Tobacco,” said Altadis U.S.A. “There is such a heritage connection between both Yargüera and H. Upmann as they both originated from Cuba. Cigar enthusiasts will enjoy not only Yargüera H. Upmann, but the tobacco brand in general as this is just the start.”

Priced between $8.50 and $9.25, this special aroma and sweet flavor of the Yargüera H. Upmann from the rolling of Yargüera’13 Tapado Shade wrapper, Criollo’98 binder and sun-grown Yargüera’13 and Criollo’98 fillers.

Available in stores now and in  three sizes: