Xarelto may cause irreversible internal bleeding that can lead to hospitalization and death. What are the risks? 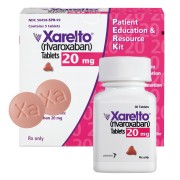 September 16, 2014 (Newswire.com) - Approved by the Food and Drug Administration (FDA) in 2011, Xarelto is a new type of blood thinner manufactured by Bayer and marketed by Johnson & Johnson’s subsidiary, Janssen Pharmaceuticals, in the United States.  It is once-daily pill for atrial fibrillation, a condition that affects about 3 million people in the United States. Xarelto is prescribed to prevent blood clots that can obstruct the blood flow to vital organs. But the drug comes with dangerous side effects such as a dramatically higher risk of bleeding complications.

Side effects of taking Xarelto include:

One of most dangerous side effects of Xarelto is uncontrollable bleeding. When bleeding occurs near a major organ, blood flow to that organ is interrupted, causing it to lose some or all of its functionality. Also, pools of blood may form within the body that can cause other dangerous health risks, and because Xarelto prevents clotting, bleeding will continue until the drug is out of the system.

While all blood thinners have the risk of internal bleeding, older drugs have emergency antidotes to prevent serious injury. Xarelto does not have an antidote.

Xarelto is considered a high-risk prescription drug because it can cause excessive internal bleeding among other injuries in patients.

There are a growing number of complaints of health risks and deaths tied to Xarelto, claiming that the drug makers failed to provide adequate warning to doctors and patients about the bleeding risks and the lack of an antidote. Studies also suggest that the benefits provided by the medication do not justify the risks.

An advisory panel to the FDA concluded that Xarelto should not be approved to prevent new heart attacks or strokes.

Xarelto’s original use, approved by the FDA, was as a blood thinner for patients recovering from knee or hip replacement surgery. The FDA then approved the drug for blood clots in patients with atrial fibrillation and to prevent reoccurring blood clots despite their own panel’s disapproval.

Xarelto side effects have prompted many patients and their families to ask about their legal options. If someone has suffered from uncontrollable bleeding while taking Xarelto, they may be entitled to money damages. To find out more about the dangerous bleeding complications caused by Xarelto and if someone could be eligible for compensation visit Xareltodanger.com.