Wristband News From Around the World

AAC ID Solutions once again presents the latest and greatest wristband-related news from across the globe. We are always impressed by the amount of new products being launched in the wristband arena, especially those designed to assist with medical conditions or social issues. The low cost, easy to wear nature of wristbands makes them non-invasive and very adaptable to different uses. Here are the news and events that have caught our attention over the past few weeks. 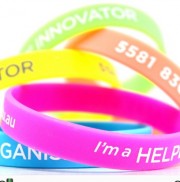 Gold Coast, Quensland, March 16, 2016 (Newswire.com) - ​Medical-quality consumer wristband monitors body signals
Empatica, co-founded but MIT Professor Rosalind Picard, has launched a wristband called Embrace. Embrace aims to monitor signals from the body, specifically to pre-warn caregivers of potentially deadly seizures in Epilepsy patients. Sensors underneath the wristband face track pulse, body motion, temperature, and EDA, which involves subtle electrical changes across the skin. Boosts in EDA, without accompanying changes in motion, can signal stress. In people with epilepsy, a sharp rise in both signals could indicate a severe, potentially life-threatening seizure. The wristband sends a message to the caregiver, via an app, that alerts them to the danger.

Wristband to save women’s lives
A software engineer in Cameron, Arreytambe Tabot, is working on an RFID-wristband with the goal of reducing maternal sepsis in Africa, where more women die from childbirth than anywhere else. The wristband holds data on vital signs of the expectant mother, allowing them to scan in during check-ups and to have all data update to the cloud. The key selling point is that the system does not rely on the literacy of the wearer, which is a challenge in rural areas.

Wristbands to assist disabled bus passengers
We like this one. 18 year old Daria Buszta of Bilborough College has started trials on a vibrating wristband that alerts people as to when their station is coming up. Aimed at those with visual and hearing impairments, the “ViBus” concept buzzes at the appropriate moment and could potentially assists hundreds of thousands of people across the UK. Nice work Daria!

Be careful with those RFID Wristbands… we’re looking at you Music Festivals!
The Gibraltar Music Festival found itself in strife recently when organizers went back on their promise to refund any monies left on their wristbands. The RFID bands were used to create a cashless bar environment at the event where patrons could upload money and use the wristband to purchase drinks. The 23,000 pounds is now apparently going to be donated to a local charity, but I doubt this will placate patrons who expected their money to be returned. Lesson for ,music festivals – be clear with your refund policy, and then stick to it.

And finally, here we go again…

Wristbands that state relationship status
Forgive us for being jaded, but this idea has been rehashed about 20 times over the past couple of years, somehow always re-packaged as though it is brand new. Cheryl Duffy in Kellyville is the latest person to launch this after “so many” people told her horror stories about “online dating sites”. How a physical wristband helps during online dating has yet to be explained, but the R U SINGLE I AM wristbands are available for a mere $5 a pop if you want to find out! Alternatively, start a conversation with someone and find out.