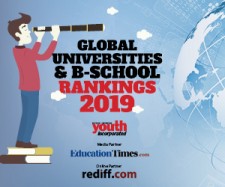 MUMBAI, India, March 5, 2019 (Newswire.com) - Youth Incorporated, in association with Education Times, Times of India, released its top 100 Global Undergraduate and Business School Rankings 2019. The programs that were ranked include Undergraduate, MBA, Masters in Finance, Marketing, Executive MBA, Online MBA, and Masters in Management. In addition to this, specialty rankings and continent-wise rankings were also published. With responses from over 4250 institutes, current students, alumni and over 26,000 recruiters from around the world, we ranked the top 100 universities and business schools. The rankings help students, who wish to learn more about undergraduate and master's programs overseas make an informed choice about the various options available to them.

The information was analyzed by emphasizing on important criteria that students consider while enrolling in an institute such as value for money, student and recruiter satisfaction, infrastructure and facilities, teaching methodologies, and so on.

The American institutes have yet again dominated the top 10 categories. Among the Asian institutes, The University of Tokyo is the only one to have made it to the top 20 this year, also rounding off the category.

The four Indian universities that make the cut every year are still the same, and no new additions have been seen this year. IIT Bombay, which maintained itself in the top 20 till last year, hopped out of the category to the 21st position. IIT Delhi showed considerable progress from last year’s 29th rank to the 25th rank this year. IIT Kanpur, which leaped to the 60th position last year, fell to the 62nd rank this year. The University of Delhi, which made a remarkable jump to the 75th position last year, fell one rank short to the 76th rank this year. For a country that bases its youngsters’ success on education, India certainly needs to focus more on the growth and development of its educational institutes.

The year also saw the standard four Indian institutes making the cut; however, there has been significant progress. IIM Ahmedabad moved up this year to the 14th rank, whereas IIM Calcutta moved up two ranks to the 16th position. The Indian School of Business (ISB) observed a decline in its rankings, moving from the 21st rank last year, to 25th this year. SP Jain Institute of Management continued its steady climb on the list with a four space jump, at 46th rank this year from last year’s 50th rank.

This year’s rankings saw Harvard University take back its pole position as top-ranked B-school in the world from the University of Pennsylvania, which fell to the third position this year. The second rank was occupied by London Business School, a two-rank jump from last year’s fourth place. Stanford University occupied third place this year, whereas Columbia University rounded off the top 5. This year saw two Spanish business schools in the top 10 category – IE Business School and IESE Spain – in which IE was already in the top 10 last year, IESE moved up from last year’s 12th rank. American universities have been consistently at the top positions, as observed over the years.

For the complete list of institutes, rankings and methodology visit www.youthincmag.com