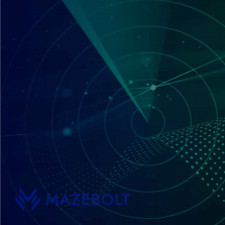 MazeBolt RADAR is a patented technology which dramatically reduces DDoS risk, in most cases by orders of magnitude. Commercially introduced last year - after more than three years of development and BETA testing - RADAR is based on a totally new concept of continuously testing the entire attack surface of networks and services for DDoS vulnerabilities, without any disruption to production availability. Once identified, all existing vulnerabilities can then be pre-emptively corrected and the fixes validated, again without disruption. By enabling these first-ever capabilities, the addition of MazeBolt RADAR now enables a transformation of DDoS mitigation from requiring reactive manual recovery to near-perfect automatic mitigation of all DDoS attacks for any web-facing network, regardless of the DDoS mitigation platform it is in use with.

As a new product in a very "noisy" marketplace, Mr. Andriani CEO & Founder of MazeBolt stated, "Our immediate key challenge is to bring to the attention of cybersecurity decision-makers the fact that this first-of-a-kind product is now available and has been extensively validated in commercial use across multiple industries and environments. During 2021, our first year of full commercialization, we were pleased to see that every completed proof of concept resulted in a new RADAR customer. Furthermore, to date, no customer that fully implemented MazeBolt RADAR has suffered a successful DDoS attack."

MazeBolt RADAR™ is the new standard in DDoS Protection. MazeBolt RADAR quantifies all your DDoS risk and evaluates your automated protection efficiency for your entire organization's attack surface.