World Refugee Day Message for a World in Crisis

Wars and persecution have driven more people from their homes than at any time since United Nations Refugee Agency began recording these statistics, according to a new report released today. 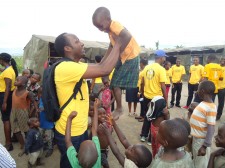 In his World Refugee Day message,  UN Secretary-General, Ban Ki-moon said, “Our responses to refugees must be grounded in our shared values of responsibility sharing, non-discrimination, and human rights and in international refugee law, including the principle of non-refoulement [the forcible return of refugees or asylum seekers to a country where they are liable to be subjected to persecution].”

Our responses to refugees must be grounded in our shared values of responsibility sharing, non-discrimination, and human rights and in international refugee law, including the principle of non-refoulement.

According to the United Nations, “every minute eight people leave everything behind to escape war, persecution or terror.” The magnitude of this situation calls for cooperation between government agencies, religious groups, civil society and caring individuals everywhere.

Scientology Churches and Scientologists advocate for the rights of refugees as an intrinsic element of their human rights initiative. For example:

Throughout the year, Churches of Scientology and their parishioners from Pasadena to Pretoria, Tampa to Taiwan, Mexico City to Manhattan and Plymouth to St. Petersburg promote human rights awareness through petition drives, educational programs and forums.

Scientologists on six continents engage in collaborative efforts with government agencies and nongovernmental organizations to bring about broad-scale awareness and implementation of the 1948 United Nations Universal Declaration of Human Rights, the world’s premier human rights document.