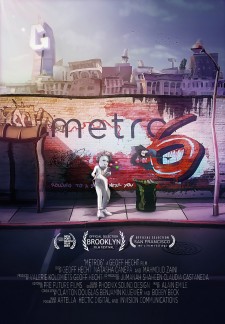 SAN FRANCISCO, May 15, 2020 (Newswire.com) - Metro6, the animated short film by writer and first-time director Geoff Hecht, will make its world premiere at the 23rd Annual Brooklyn Film Festival (BFF), a qualifying event for the Canadian Screen Award. Out of 2,589 overall submissions received, 148 total films made the cut, including Metro6. Though originally scheduled to debut at the SFFILM Festival, an Academy Award-qualifying event for animated shorts, and selected for the 21st Newport Beach Film Festival, Metro6 and its collaborators are thrilled to be part of the prestigious BFF lineup.

In light of efforts to stop the transmission of COVID-19, the BFF has transitioned to a virtual setting, making its programming free and fully available online from May 29 through June 7, 2020, by registering at www.brooklynfilmfestival.org.

“It would’ve been great to have our world premiere in my hometown of San Francisco, but COVID-19 had other plans,” Hecht explained. “It’s really special to have our new world premiere at the BFF. Made possible through the Artella platform, we’ve had 78 collaborators from 17 different countries, speaking seven different languages from all around the world working on Metro6. With this year’s BFF being virtual, it’s a unique opportunity for our entire Metro6 team as well as family, friends, colleagues, neighbors, and animation lovers to be part of the premiere together, despite being separated by thousands of miles.”

"Metro6 follows Zak, a character who doesn't understand the true sense of community,” Hecht explained. “He's absorbed in technology and doesn't notice anyone around him. It was never Zak's intention to take the bus on this fateful day, but the lessons he learns on his 8-minute, action-packed bus ride are both unexpected and deeply important.”

Beyond the comedic surface level, as the protagonist learns to set his phone down and engage in the world around him, Metro6 hopes for viewers to use social media for good: what was once a source of division, is now our most valuable means of staying connected.

“Having grown up in San Francisco, I first started riding public transit alone at 8 years old,” Hecht said. “Being exposed to so many people of different races, sexual orientations, professions, and personalities in such a small space helped shape me into the person I am today. I was raised by a hard-working single mother and never met my father, so I feel to a certain degree that the people of public transit and the city of San Francisco raised me. Now as COVID-19 is on top of everyone's minds, it strikes me that very same thing that shaped me as a person has suddenly become a source of fear for all of us: being in close proximity to strangers.”

To view the trailer or access more info about the film and movie stills, visit: https://www.brooklynfilmfestival.org/film-detail?fid=2168