In 1982, Dr. Moon and her late husband, Rev. Dr. Sun Myung Moon, founders of the Family Federation for World Peace and Unification, officiated a Marriage Blessing Ceremony for 2,075 couples at Madison Square Garden. In 1992, Dr. Moon established the Women's Federation for World Peace, an organization that encourages women to promote peace in their communities and the society-at-large, within 143 countries. Family is central to Dr. Moon’s philosophy of peace. “If a family is not centered on God's ideal of love, there will be conflict among the members of that family. Without God's love as an absolute center, such a family will ultimately break down. A nation of such families will also decline,” notably, is one of Dr. Moon's greatest quotes on the importance of the family.

When Dr. Moon returns to Madison Square Garden on July 15, Peace Starts With Me will feature performances by numerous U.S. church choirs, gathered from across the nation, during a high-voltage Cultural Music Festival. The choir will sing praise together with sensational Grammy Awardee Yolanda Adams and gospel legend Hezekiah Walker, laying the ground for a Holy Spirit Awakening. Ambassador Suzan Johnson Cook, the highly sought-after, charismatic theologian, best-selling author, minister, and America's first female and African American U.S. Ambassador for International Religious Freedom, will address the Women’s Federation for World Peace Forum at the New Yorker Hotel, where she will empower our quest for religious freedom at 10:00 a.m.

In 1954 North Korean Rev. Sun Myung Moon, established his ministry in South Korea, years after escaping Communist North Korea. By the end of the 20thCentury Rev. Moon and Dr. Moon's Holy Spirit Movement exceeded millions of members, including thousands of Americans. Rev. and Dr. Moon's sensational spiritual humanitarian, yet controversial Christian doctrines validate Christ as the Holy Spirit, whose mission they described as incomplete since he never married. Their burgeoning congregations agree that Rev. Moon and Dr. Moon are True Parents of the Holy Spirit. At age 17, Hak Ja Han's mother, a congregant at Dr. Moon's church, approved her marriage to Dr. Moon, then nearing his 40s.

Long ago appointed by Rev. Moon, to succeed as their Family Federation for World Peace leader, Dr. Moon, and her children are adept at preserving their religious dynasty. As the Peace Mother, her initial Peace Mission's speeches also addressed critical concerns regarding America's 1990's violence. Her world speaking tours in the U.S. were held at Washington's D.C. National Building Museum, several states in the U.S. and UN. Dr. Moon's  ceremonious speaking engagements took place in Italy, Japan, Korea and other nations. Dr. Moon who bore 16 children of her currently 13 living children, during the midst of adroitly expanding and managing she and her husband's global ministry and enterprises, is similar to respecting Rev. Moon's assertion that Jesus called him, while a teenager to build a divine vast Christian and Interfaith Ministries. Enter Peace Mother, Hak Ja Han Moon.

Notably, The Divine Principle best-selling book by Rev. Moon parallels his relativity to Christ, Fisher of Men, during biblical history. For nearly 50 years, many acknowledged how well the Family Federation for World Peace’s Rev. and Dr. Moon, jointly, sought, motivated and provided much underwriting to educate, spiritually and otherwise heal, house and employ distress members, among others. They were yesterday's Asians, Blacks, Caucasians and other entrepreneurial interns, since the 1970's courageously approaching Americans to buy one dollar, one long-stemmed rose, and candles, despite being labeled Moonies. Among them, thousands became Family Federation for World Peace's student graduate-ministers, preaching and teaching today's Gospel. 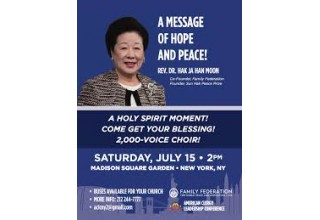 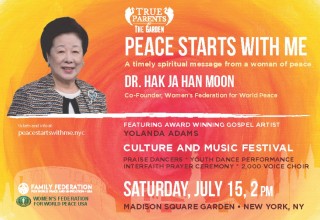