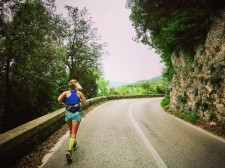 LONDON, September 22, 2020 (Newswire.com) - 2,489 miles. 95 marathons in 95 days. 3 countries and 3 states. Marathons at 100 degrees. Marathons in the middle of the night. Marathons on treadmills alone. Marathons with her best friends. Alyssa Clark, 27, decided to attempt the Guinness World Record for most consecutive marathon distances after training for a summer of marathons that were canceled due to COVID-19. On Day 61, she smashed the world record… and kept on running, with a goal of 100 marathons. Though she made it to 95 marathons without injury, her goal was cut just short when she contracted a serious respiratory infection and later tested positive for COVID-19. Reflecting on her 95-day journey, she said, “I never thought it would go this far or that this many people would care. I just hope I helped motivate other people to push through these hard times. That means the most to me.”

Alyssa dedicated the last 10 marathons of her record-breaking effort to Bondh E Shams – The Solar Water Project, inspired by a goal of bringing clean water to young women and girls in South Sudan and Pakistan. Says Alyssa, “It’s a great cause, and water is so important to being an athlete. So I thought it was a great connection – and a great way to end my marathons.” Bondh E Shams – The Solar Water Project, was founded by Alyssa’s classmate at Williams College, Hamza Farrukh, and has provided 20 million cups of clean water in under-resourced communities since 2014. The Solar Water Project’s signature technology, the OASIS Box, is an all-in-one modular solar-powered water pump and filtration system that can serve clean, safe water to 4,000 people a day for 25 years for only $10,000. Alyssa is still helping raise funds to install a new OASIS Box at a school in Pakistan here: https://www.bondheshams.org/donate

Bondh E Shams leverages the power of smart-tech and renewable energy to fight the global water crisis. We do this by creating cost-effective water technologies in support of UN Sustainable Development Goal 6 (Clean Water & Sanitation).