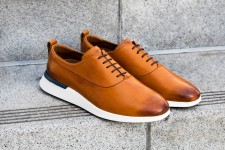 LOS ANGELES, October 30, 2019 (Newswire.com) - On Oct. 29, men’s luxury footwear brand Wolf & Shepherd released its latest shoe - the Crossover - in collaboration with two-time NBA MVP Steve Nash. The Crossover is the company’s first product designed primarily for business casual settings, tapping into a market they believe has enormous upside for the company. At $269, it averages close to 25% cheaper than the majority of Wolf & Shepherd’s collection and will serve as a cost-effective entry point into the brand.

As part of the collaboration, 13% of sales will be going to The Steve Nash Foundation, a multi-faceted charity aimed at providing resources and opportunities for healthy lifestyles in kids.

When asked about the collaboration, founder and CEO Justin Schneider said, “Working with Steve [Nash] has been about as great an experience as you could ask for. He embodies so much of who we aspire to be as a brand - both on and off the court - which makes this so special.”

The Crossover uses the same full-grain Italian leather and memory foam cushioning seen in Wolf & Shepherd's core product line but, instead, uses a sneaker-like EVA sole, along with other athletic-inspired features.

About the Crossover, Schneider said, “We created this shoe [the Crossover] to give men something they can confidently rely on in the otherwise vague 'business casual' space. The result is something that works just as well with slacks as it does with jeans, making it an incredibly versatile shoe."

Started in 2015, Wolf & Shepherd is a men’s footwear brand that specializes in comfortable dress shoes re-imagined for the modern worker. Based in Los Angeles, they have two retail stores in Los Angeles and New York City.