The company has launched a Kickstarter campaign to offer initial pricing and benefits to those purchasing early and supporting their launch. 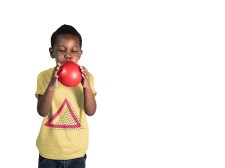 ​Hoboken, New Jersey, January 17, 2017 (Newswire.com) - Mom and designer Ashwathy Pakshimana has recently launched her new company WobblyTots, LLC on Kickstarter. Pakshimana is utilizing her design expertise to create and sell kids tee-shirts that offer a minimalist design. She believes less is more and all the tee-shirts sold are unisex, eco-friendly and fair trade. The Kickstarter campaign will offer four designs for children ages two to six, and when the company is fully launched, a full-line with an additional four minimalist designs will be added.

“Being a mom who loves to pick simple clothing for my family, I was tired and sad to see that a huge chunk of the children's market had clothing with pink oversized bows, sequins, sports logos, super heroes and some garish graphics as the norm,” says Pakshimana. “I created WobblyTots to offer parents the option of kids’ shirts that have a refreshing sense of simplicity in vibrant colors that are little more sustainable, timeless, and higher quality.”

The Kickstarter campaign offers a range of pledge options. For $20, a supporter can choose any one WobblyTots’ minimalist design kids tee-shirt of their choice from the launch collection and a hand written thank you card will be included. The company will ship to anywhere in the world. For $75, a supporter can choose any three of the designed shirts. For those looking to make a larger investment, the campaign offers the option to pledge $500 with the supporter having the ultimate choice of designing their own WobblyTots minimalist design tee-shirt in the color they want. If the design fits with the company line, they will offer it as part of their collection.

The high-quality tee-shirts will be 100 percent organic cotton and made by HAE Now, a company which partners with Fair Trade USA’s apparel program to support their worker empowerment projects worldwide. If the Kickstarter campaign is successful, Pakshimana plans to launch her online store in Feb. 2017. ​To make an early purchase and support the campaign, visit WobblyTots Kickstarter campaign.

WobblyTots is a line of Organic Minimalist design Tees for Kids.
We believe in "less is more" . All the Tees we sell are unisex, eco-friendly and Fair Trade Kids Tees with its minimalist designs.