Property for Sale Magazine Reports the Story of Father-Son Duo: Without Train Ticket to Private Jet

A 500 Million Dollar Company - The Story of Rags to Riches 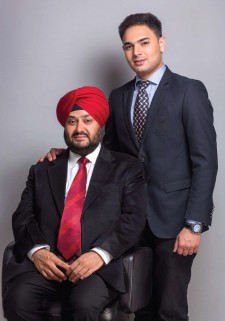 New Delhi, India, September 3, 2016 (Newswire.com) - "Tough times don't last, tough people do"- this statement traces the life of father-son duo, R.S Jaura and Yuvraj Jaura quite well, who opted the hard way of life intentionally. They could have asked for parental favor but their sheer self-belief and deep rooted conviction didn't let them to do so. With their own set of values and a desire of accomplishing something big, they created their list of 'to-be-achieved' goals and eventually realized them with dedicated efforts. Though there exists a generation gap between the two but it only complements their personal and professional bond.

Jaura senior has led a life that is nothing short of a 'rags to riches' story. With dramatic twists and turns, lead by morals and righteousness, R.S Jaura paved a path of success for himself over the decades. As a youngster, he got inspiration from an old man living in his locality "Shri Lala Jagat Narayan" (Owner of Punjab Kesari) and took him as his mentor, where during emergency he learned the value of media and journalism which brought the much needed direction to a young virgin mind.

A filmy tale as it can be rightly said, Jaura senior, at a tender age of 14 years took a leap of courage and voiced against the unruly tradition at his school in Jalandhar, where teachers used to compel students to buy guides and take tuitions from them in order to clear the exams. A self-made boy, who used to insert leaflets in Punjab Kesari, Jalandhar to earn money for his books couldn't bother his parents to buy him additional guides and arrange for tuitions. Having been unable to afford those guides, he protested against the school's prevailing system, went on a strike with fellow mates as a leader and made the wrong, right. This brave act of his that was directed towards a greater good of students inspired the big & powerful Sikh leader, Jathe Dar Santokh Singh (who was very close to then Prime Minister, Indira Gandhi) so much so that he invited Jaura to join him in Delhi.

The rest went like a filmy story where the hero is shown a direction and he treads the path facing all the odds, finally to win against his destiny and carve one on his own. Remember the Amitabh Bachchan from 1970s hit flick ‘Deewar’, where Bachchan eyes a building, asks for its price while not even having a penny in his pocket only to buy it later on. Similarly, Jaura senior too had his tryst with time when he traveled to Delhi without a train ticket as he couldn't arrange the money for it, only to form his own aviation company with multiple jets almost two decades after the incident. However, in these two decades no magic happened as Delhi did give him luxurious dreams just to break his sleep. With Santokh Singh's murder, Jaura senior became directionless and had to try his hands on many petty businesses for his survival. He entered video cassettes' business by converting piracy into copyright in the 1980 and launched brands like Bambino, Shemaroo, Shine Star and Sun Star. By the late 80s, he established and expanded video library chains in North India. But soon digitalization entered India fading the video cassettes and he quickly moved to electronics by broadcasting programmes like 'Cinema Cinema' on Doordarshan. Almost 15 such programmes ran on DD and earned him loads of money.

With his wit, will and passion, he invested in mining business and soon emerged as a big shot businessman. During the late in 1990's he dreamed of buying a chopper and in 2013 his dream came true as he owned his own chopper. His rising success showered new ideas and directions on him and then came the time when he realized his vision of owning an airplane. He formed an aviation company in the year 2013 and today he also owns a hangar at Indira Gandhi International Airport, New Delhi.

Having diversifying themselves into different areas and industries, the father-son duo found their true calling in real estate venture. But as it is said that the genes travel to different generations leaving their traits behind, Yuvraj didn't build his company on his father's mettle. With self-belief and values inherited from his father, he went on to work for five years in the market gaining all possible insights and tracing the vertical map of growth before joining Jaura senior as the leading chairman and managing director of Jaura Infratech. in 2007.

Symbolizing growth, this company aspired to expand across the country and abroad and within a short span of less than three years, Jaura Infratech today has traced the trajectory of growth the graph of which is only moving higher.

Blending his father's conventional expertise to his new age strategies, Yuvraj is breaking the monotony of regular products in the real estate industry. Seeing his son's futuristic approach and ethical practices, Jaura senior too let the scion take charge imposing full confidence in him. According to R.S Jaura, in this fast pacing technological world, there is a dire need of innovative ideas not only in terms of promoting the business but also in terms of delivering the best. And, under the leadership of Yuvraj, an active, futuristic and focused young team, capable of tapping all the possible resources to bring out the best in this real estate has taken shape.

Under the Jaura junior's command, the standards of the pre-sale strategy, customer satisfaction, construction quality and timely delivery have improved. He brought in new age techniques of engineering, innovative designing, architectural finesse, quality and timely completion to redefine the already established business of his father and has set a benchmark of excellence in the contemporary scenario. His leadership has taken the commitment of employees and the clients towards the company to a different level where world class projects and plans of expansion takes birth to achieve further growth and brings in confidence to foray into new regions.

Progressing with the guiding force of his father, Yuvraj is consistently bringing in results with an ever increasing goodwill for their business. And as it is said that wise men learn from the experience of others, Yuvraj too takes pearls of wisdom from the life of his father, who has seen ups and downs in business during his initial years. This makes challenging the old successful recipes easier for Jaura Junior as he believes in giving way to change in this unprecedented time where technology changes the formula of survival and success every other second.

Now that a perfect mix of experience and dynamism is being created to achieve greater heights in business, the Jauras are looking forward to bring in the youngest family member in the brigade as well. Moving on the path created by his father and brother, Navraj Jaura, the youngest of the Jaura clan, has completed his studies and has done numerous internships at different firms across the world. He too, like his father and brother, has gained his own life's experiences so as to become a wise decision maker. Steadily learning the real-estate business under his elder brother, he looks quite promising for his age and will soon tread along with him in taking the business to new heights.

Jaura Group is a diversified conglomerate, with various successful ventures in a range of industries in Real Estate, Aviation, Mining and Film Production.