When the World Met Billy Graham 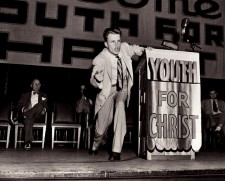 ENGLEWOOD, Colo., February 21, 2018 (Newswire.com) - From a 150-foot platform, the young, fiery evangelist could see the crowds hadn’t filled the 1949 Los Angeles crusade tent to capacity. But for reasons unknown to Billy Graham, media mogul William Randolph Hearst issued a two-word directive to all his publications that made Youth For Christ’s first employee an instant celebrity.

“Puff Graham” was the mandate Hearst issued and “the sudden front-page coverage" showered on Graham by Hearst newspapers... was quickly matched by other newspapers and news magazines [creating] literally a media circus descending on his rallies under a big tent,” John Dart reported in a 1997 Los Angeles Times article. The coverage enabled Graham to extend that Los Angeles crusade six more weeks, and to launch the Billy Graham Evangelistic Association and preach the Gospel to more people in live audiences than anyone else in history.

Dr. Graham, who passed away today in Montreat, North Carolina, at age 99, helped birth Youth For Christ, an organization originally founded for ministry to youth and servicemen during World War II. Today Youth For Christ is one of the longest-recognized outreach organizations serving young people worldwide.

According to Graham biographer William Martin, 1949 wasn’t the first time Hearst ordered coverage of the Youth For Christ organization. Hearst also sent a “puff YFC [Youth For Christ]” telegram in 1946, according to Martin’s book “A Prophet With Honor” (William Morrow,1991). The Hearst-owned Los Angeles Examiner also gave Youth For Christ leader Roy McKeown a weekly column to report on the group’s activities. “Youth For Christ came into being through a conversation I had while fishing off the coast of Florida in late 1944,” Graham said in his autobiography, “Just As I Am” (Harper Collins, 1997). “It was my privilege to be the first full-time employee of Youth For Christ... It grew rapidly, and thousands of young people came to Christ.”

As Youth For Christ’s first field representative, Graham’s salary in 1944 was $75/week, plus expenses. In his first year with the organization, he traveled 200,000 miles speaking in 47 American states and establishing a pace and ambitious travel scope he would maintain for most of his life.

Graham made his first trip overseas in early 1946 and continued preaching throughout the United States and Europe in the immediate post-war era, emerging as a rising young evangelist. He went on to become Vice President of Youth For Christ International and to publish a book from his Youth For Christ experiences “Calling Youth to Christ” (1947).

“We stand on the shoulders of Dr. Graham’s legacy of innovation and passionate drive to communicate with young people around the world,” said Dan Wolgemuth, president of Youth For Christ USA. “Dr. Graham’s gifted style was considered ‘edgy’ in the forties so it, of course, appealed to young people. Today, Youth For Christ continues what Dr. Graham started by loving and engaging young people in relevant, authentic conversations through the latest technologies and the life-changing power of story—God’s story and their story.” Dr. Graham recently shared some of his thoughts with Youth For Christ’s staff about their work, “...the instruments that technology has provided are sharper. I see no reason why we could not touch the entire youth population of the world in the next quarter-century with the good news of the Gospel. Youth For Christ staff, let’s make that our goal!”

Youth For Christ is active with 23,000 staff and volunteers in 2,000 communities in all 50 states as well as more than 130 countries. Youth For Christ USA is committed to serving young people—especially those on the fringe—with sustainable youth and family outreach.

A special legacy tribute webpage, with the ability to share personal stories connected to Dr. Graham’s legacy is available online at www.yfc.net/billygraham.

About Youth For Christ USA