What's Next for Kim Jong Un? Maybe He Doesn't Want to Know! 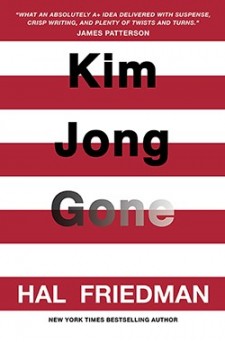 NEW YORK, March 14, 2019 (Newswire.com) - "Kim Jong Gone" is the just-released international thriller, the third novel by New York Times bestselling author Hal Friedman, whose "Against Medical Advice" was co-authored by James Patterson and went to #1. A retired advertising creative who authored "The Kodak Moment," Burger King's feisty "Battle of the Burgers" and others, Friedman has conjured up one of those potentially rare, earthshaking events which literally threatens the world.

This is one book that Kim will definitely not be reading. Then again, maybe he should.

"Kim Jong Gone" is set in New York City during Kim's first visit to America. As Kim lands, the world braces for something to go wrong, and something unimaginable does. After an assassination attempt in an NYC tunnel, Kim isn't in his devastated limo. He isn't anywhere. And an ex-cop whose brother is being held prisoner in North Korea has been chosen to help find him on a covert mission.

The search is on by the ex-cop and his smart, young NYPD female partner, the FBI, Army Special Ops and a secret group which is after Kim for its own reasons, in the most audacious kidnapping of all time. The stakes couldn't be higher for the world and the ex-cop as the search leads to a tiny deserted island and a bizarre band of kidnappers lead by a cunning, power-crazed woman. With a stunner of the last gambit that will leave you gasping.

This is a timely story that one can hope never plays out in real time, and, as one reviewer says, is filled with more twists and turns than the Pyongyang Roller Coaster of Death. So hold on to your seat and enjoy the ride!

Available on Amazon and other eBook retailers.