SAVING LIVES WITH ANONYMOUS REPORTING SINCE 1972 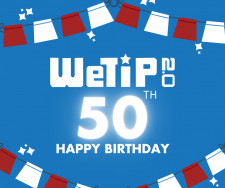 RANCHO CUCAMONGA, Calif., February 16, 2022 (Newswire.com) - This week WeTip, the national anonymous tip reporting system, celebrates its 50th anniversary. From frightened children to the hunt for infamous serial killers, WeTip enables anyone to call, click or text a tip about a crime or suspicious activity to our national hotline.

Because of the two million anonymous crime reports that WeTip has received:

Working with law enforcement and television stations across the country, WeTip answered the call by actively taking 24/7 tips on the Night Stalker serial killer, the Hillside strangler, Jeffrey Dahmer and the Green River Killer as well as thousands of other media calls to capture dangerous criminals.

Because of WeTip, thousands of parents are hugging children whose lives might have been lost. Just imagine the children who didn't deal with the pain of abuse and the families who didn't bury a loved one because anonymous crime reports poured into WeTip, alerting law enforcement of the predators in their communities.

It all began in February 1972 when WeTip's founders, Bill and Miriam Brownell, turned their vision for safer communities into a reality. They worked tirelessly to grow and expand this novel and innovative way to report a crime or incident without fear of reprisal. As the grandfather of all anonymous reporting hotline services, WeTip's founders blazed a trail that enabled communities, schools and businesses to join forces with WeTip in the War on Crime.

The 1970s and 1980s began a new era of community action and safety awareness. WeTip was at the forefront of the movement, leading the charge for safer neighborhoods. This quickly expanded anonymous reporting on all major crimes.

The Future of Anonymous Reporting

As we enter the next decade of growth, WeTip is now WeTip 2.0, powered by CatapultEMS. Our new solution provides interactive capabilities for law enforcement agencies to search and see tip data in their cities and counties. WeTip's new processes, hardware and software will empower the new WeTip website to receive tips for decades to come.

WeTip invites all communities, schools and businesses to join together for safer neighborhoods for us all.