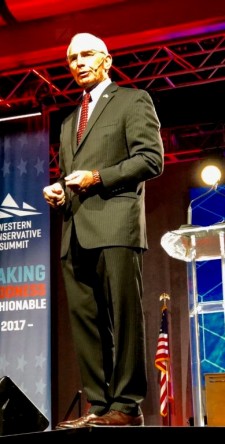 DENVER, July 30, 2018 (Newswire.com) - The following is an open letter from Bob Beauprez, Director of The Western Way – a nonprofit organization creating conservative, market-based solutions to U.S. environment and conservation challenges.

U.S. Energy Secretary Rick Perry recently published an article highlighting the extraordinary energy transformation that is underway across the United States. Secretary Perry aptly wrote that “our country is in the midst of a spectacular period of energy progress” that is now “producing abundant, affordable energy from a wider range of energy sources than anyone thought possible…”

Not only has this “energy progress” created a surge in domestic energy supplies but it is also driving the U.S. economy, creating new jobs, lowering consumer energy prices, and protecting national security interests by virtually eliminating U.S. dependence on volatile foreign energy sources. While these are overwhelmingly positive advancements, the burden of updating energy policies that reflect this new world order in market supplies predominantly falls on the states.

States are under increasing pressure to modernize state energy policies to match the realities of modern-day energy production. Recent technological advancements have led to highly efficient extraction of traditional fuel sources and created a surging supply of market competitive renewable resources. State energy policies now need to be revamped to match the operational realities on the ground in each state.

Western U.S. states have taken a leading role in this effort. Colorado, Nevada and Arizona have each initiated the process of overhauling the state’s energy policy.  These proposed revisions reflect the monumental changes in U.S. energy markets. The “Colorado Energy Plan” is currently before the state’s utility commission and would dramatically increase renewable energy production provided the increase is cost-neutral for consumers. The “Nevada Energy Choice Initiative” was passed by 72 percent of state voters in 2016 and would allow for consumer choice in the state’s electricity market if ratified by a second statewide vote in 2018. In Arizona, competing proposals have just been submitted that call on the state utility to increase the state’s renewable energy standards.

These are critical windows of economic opportunity for state leaders. A balanced, economic-based energy policy can ensure the state is maximizing its unique portfolio of energy resources resulting in significant and sustainable economic and job growth. Need proof? Look at Secretary Perry’s own state of Texas as a case study for an economic-based energy policy that maximizes energy production and drives sustainable economic growth.

At the risk of augmenting the state’s deservedly healthy ego, the fact is that Texas was way ahead of its time in establishing an innovative state energy policy. Over the past twenty years, Texas implemented an innovative state energy policy that has driven unprecedented growth in energy production and state economic growth. The policies center on maximizing each energy resource available to the state. By adopting a true “all of the above” energy policy, that is based on reliable economic modeling rather than fleeting partisan trends, Texas has emerged as the state leader on both traditional and renewable energy resources.

In 1999, Texas Governor George W. Bush, deregulated the state’s power market and introduced diversified power capacity requirements. Six years later, the next Texas Governor Rick Perry expanded the program and added transmission infrastructure that could move wind generation across the state. These policies did not hamper traditional energy production but instead created a state business and regulatory environment that encouraged the most efficient growth of all energy supplies.

Today, the bounty of Texas’ balanced energy policies is obvious. Texas leads the United States in natural gas production and renewable energy production. Last year, Texas generated 18 percent of its energy from wind and solar, resulting in lower retail electricity prices that are now well below the U.S. average. Texas’ embrace of an “all above energy” policy has contributed to unprecedented economic growth in the state and resulted in Forbes ranking Texas as the leading state in job growth, business climate, and resource production. Texas came to this result by basing state energy policy on objective economic data that showed boosting capacity in traditional and renewable energy production would drive state economic growth and restrain electricity prices for consumers.

As Secretary Perry noted in his recent article, recent developments in U.S. energy production have created economic opportunities across the country. States developing new energy policies should not view this as an exercise to create burdensome state regulations but as a significant opportunity to drive state economic and job growth. While each state hosts its own unique portfolio of energy resources, The Texas Way demonstrates that an “all of the above” energy policy that maximizes each energy resource available to the state will deliver significant and sustainable state economic growth.

About The Western Way

The Western Way is a nonprofit urging Western conservative leaders to deliver efficient, pro-market solutions to environmental and conservation challenges.