Jumpstart Test Prep's curriculum content review and time management strategies proved to be a successful combination by producing gains of +4 points in English, +3 Points in Reading, and +2 Points in both Math and Science over prior best three attempts. 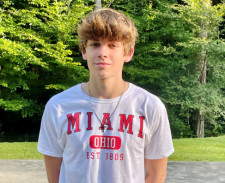 BROOKHAVEN, Miss., July 2, 2021 (Newswire.com) - After using Jumpstart Test Prep to prepare for his fourth attempt at the ACT exam, West Lincoln Attendance Center freshman Carson Temple saw dramatic gains in his performance. The highest possible ACT® score is a 36, and the national average last year was a 20.8. On his fourth ACT® attempt, Carson improved from his prior best score of 28 to an impressive 31.

It is not a secret that discipline and perseverance are key elements to success. Carson knows this well as he is a high achieving student who loves to play basketball and is very musically inclined, playing both piano and guitar. His commitment to achieving success is evidenced by his journey to reaching improvements on the ACT®, a test that many high school students dread. Carson initially took the ACT® in seventh grade and achieved a composite score of 22. In February 2020 he re-tested, which resulted in a composite score of 27. He waited a year and took the ACT® a third time, this time scoring one point higher and reaching a 28-composite score.

Carson's goal was to achieve a 30-composite score to be able to qualify for dual enrollment as a sophomore. With this goal in mind, he began to prepare once again for the ACT®, and this time he utilized Jumpstart Test Prep's complete ACT® review program. Carson recently received his scores from the June 2021 test date and was very pleased with his results. He improved +4 points in English, increasing his score from a 31 to a 35; +3 points in Reading, from a 30 to a 33; and, +2 points in both Math and Science. Carson was proud to reach his goal and achieve a composite score of 31, increasing +4 points from his initial composite score of 27.

"Jumpstart was a really good review of things I hadn't seen since several grades ago," Carson said. "I also learned new things which helped me on the ACT® and will help me throughout the rest of high school," he continued. Carson's mother, Melissa Temple, heard about Jumpstart from a friend and is glad she did. "It was definitely worth purchasing, the review really helped Carson improve his ACT® scores, and I am very proud of him for reaching this goal." Carson said he has plenty of time to decide what his future holds but hopes to attend Law School at the University of Mississippi.

"Carson represents a number of students who are able to change their futures with meaningful improvements by using our review products to successfully prepare," says co-founder and CEO Sha Walker. "Our review program was developed by the legendary former West Lincoln educator and 19-year STAR teacher, Dot McClendon, who has tutored thousands of students, helping them to perform their best. Jumpstart Test Prep is a proven, modern approach that works for anyone. We are so proud of Carson for his determination and know he has a bright future ahead."

The company's website, www.jumpstarttestprep.com, describes its program as a review - utilizing streaming video modules that are delivered on-demand. The program is designed for classroom integration or individual study and proven to help students of all ability levels stay fully engaged. Students gain the most improvement in the shortest time by learning difficult content in a way that every student can follow and understand. Students follow and complete the accompanying workbook as the review proceeds. Modules review the must-know content, include testing strategies specific to the exam, and conclude with realistic question practice modeled from actual "retired" exams that are provided under time constraint. According to student reviews of the program on the website, the program helps students with time management, allowing them to work faster on test day. The company has found that when students are coached step by step, they can quickly secure significant gains, regardless of their initial proficiency in the subject area. Jumpstart's ACT® subject area prep can be purchased à la carte at www.jumpstarttestprep.com.

Juniors at D'Iberville High School Achieve Remarkable Improvements on the English Section of the ACT
ACT English sub-scores show significant improvements over prior best scores, with 62% of students improving by an average of +3.21 composite points
Jumpstart Test Prep - Jun 22, 2021