West 32 Soju is one of the only Korean-style soju made in the United States and is available to a wide market. 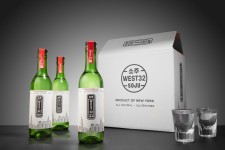 New York, New York, March 1, 2017 (Newswire.com) - Officially launched in Dec. 2016, West 32 Soju is gaining market ground. Korean soju is the number one selling distilled spirit in the world, outselling vodka by nearly 3 to 1.  While nearly all soju in the U.S. is imported from Korea, West 32 Soju is one of the only Korean-style soju made in the U.S., the product is now available in New York, California, New Jersey, and Washington D.C. and will be available soon in Texas and Missouri. West 32 Soju is also the only soju in the world distilled by corn, and is both gluten-free and all-natural, unlike other imported soju.

Soju has been distilled in Korea for hundreds of years and is low-proof “Korean vodka.” It is shared at social gatherings, parties, and celebrations. Traditional soju is sweet tasting with some having fruity undertones while others described as milky. Since the product has become mass-produced, it’s been mixed with artificial flavorings, sweeteners, and chemicals, resulting in an overly processed, sickly sweetened beverage that leaves a lingering, unpleasant aftertaste.

Two college friends who moved to New York City and frequented West 32nd Street, also known as Koreatown, knew they could make a better tasting, higher-quality soju then the artificially flavored imported soju they experienced in the city. The concept and production for West 32 Soju was born.

“We wanted to make a different soju, one that continued the time-honored Korean ritual of celebrating life with soju and that did not contain the super sweet artificial flavoring of the soju that we're accustomed to” says Daniel Lee Co-Founder of West 32 Soju. “Our aim was to make the best-tasting, all-natural soju, and we accomplished that making it locally in New York City. Our customers can chill a bottle and drink it neat, on the rocks or mixed into cocktails but the best is sharing it with a group of friends.”

West 32 Soju is available in New York at Talde, SojuHaus, JungSik, Osamil, Gunbae, and many other restaurants and retail stores. To learn more about the company or inquire about carrying the product, visit West32Soju.com.

West 32 Soju is an American take on a traditional Korean spirit. Our soju is made in New York, all natural, and gluten-free. It is inspired by the creators’ time on West 32nd Street, sitting around a table hanging out with friends, late into the night. For more information, visit West32Soju.com.

West 32 Soju Wins Gold Medal at 2017 New York International Spirits Competition
West 32 Soju was the highest rated soju at the event and was awarded Soju Producer of the Year for New York State.
Archibald & Wens - May 25, 2017