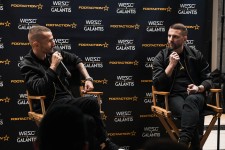 NEW YORK, February 24, 2020 (Newswire.com) - On February 13, the night before Galantis' two sold-out shows in NYC, the internationally acclaimed duo teamed up with WeSC and Footaction to do a Meet & Greet and launch the beginning of the WeSC x Galantis collection with three exclusive t-shirts at the Footaction 14th Street NYC location.

The packed event had fans waiting in line for a chance to meet Galantis and get their hands on the exclusive t-shirts at Footaction before the entire collection hits retailers throughout the U.S. and Europe later this year.

The full collection consists of 14 items, including t-shirts, windbreakers, joggers and bomber jackets. These items will be featuring design incorporations from a previous Galantis album and single artwork, as well as visual assets from their live shows.

“The event at Footaction was a great way to launch our collaboration with Galantis. I look forward to the collection hitting other retailers around the world for the back-to-school period.”

WeSC designs, markets and sells clothing and accessories in the premium streetwear segment of the international market under the WeSC (We Are the Superlative Conspiracy) brand.

Setting a new standard for songwriting in dance music, Galantis is a collaborative project between Christian Karlsson (aka Bloodshy, one-third of Miike Snow) and Linus Eklöw (aka Style of Eye). Their debut album Pharmacy reached No. 1 on the Billboard Dance album chart on the strength of RIAA gold-certified single “Peanut Butter Jelly” and platinum-certified smash “Runaway (U & I),” while their 2017 sophomore album The Aviary (featuring platinum-certified single “No Money”) saw a top 10 debut in 23 countries. The duo recently released their third album Church, which features their explosive single “Faith” with Dolly Parton (feat. Mr. Probz) and surpassed 200 million streams in one week on Spotify alone. Following their blockbuster performance debut at 2014’s Coachella Valley Music and Arts Festival, the duo quickly rose to become one of dance music’s most dynamic and in-demand live performers - this year alone selling out headline Church of Galantis shows in San Francisco, Red Rocks and back-to-back shows in New York City. To date, the duo boasts over 3 billion cumulative worldwide streams and over 1 billion video views.