As of April 2018, the interface of the WebCEO online platform for SEO agencies has been translated into 24 languages. 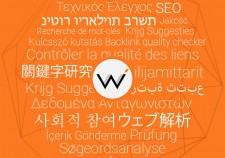 LONDON, April 18, 2018 (Newswire.com) - WebCEO, a 15-tool online platform for SEO, Social Media Marketing and Competitor Research, has been translated into 24 languages, thanks to the platform's revolutionary Crowd Translation Center.

Back in 2010, when the WebCEO online SEO platform was officially released, it was only available in English. With the growth of WebCEO's digital agency client base across the globe and an on-going demand for multi-language interfaces and reporting capabilities, the WebCEO team started working on a wiki-type solution to have the software translated to as many languages as possible and let WebCEO users contribute to the translation process.

Providing branded SEO reports to your clients in their native language is critical and can be a real distinguisher for you as a Digital Agency. While English is one of the most popular languages in the SEO community, many markets demand that services be provided in such languages as Spanish, French, German, Chinese and many others.

In July 2015, the WebCEO team released the new Crowd Translation Center, which helped SEO Agencies and individual SEO practitioners take part in translating the WebCEO reports and its interface to their languages. By the end of 2015, the WebCEO interface was successfully translated into 9 languages: Danish, Dutch, Simplified Chinese, Spanish, French, German, Italian, Brazilian Portuguese, and Turkish.

The most active translators are the personnel of large Digital Agencies and white-label users who are interested in providing professional SEO services in the native language of their customers. The quality of translation is being moderated by the WebCEO team and by regional partners of the Web CEO company.

The translation activity is happening on an ongoing basis, so the WebCEO team expects to have WebCEO translated into 30+ languages by the end of 2019.

In 2010, WebCEO developed an SaaS product called WebCEO Online. Since that time, the company has collaborated with large SEO Agencies and corporations while adding new advanced features to its website marketing software. By 2016, WebCEO online software became an online platform for SEO, Social Media Marketing and Competitive Research, and offered enterprise-level features such as the SEO Task Manager, a Lead Generation module, SEO API, a white label platform on a user's domain and the Crowd Translation Center.

The WebCEO SEO platform is currently used by more than 1,250,000 online businesses in more than 150 countries.

Web CEO Ltd. is a UK-based software development company founded in 2000. It specializes in developing and marketing computer software for Internet Marketing and providing online training and certification.