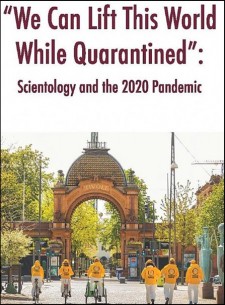 LOS ANGELES, August 19, 2020 (Newswire.com) - A book by Rosita Šorytė, Lithuanian diplomat and president of the International Observatory of Religious Liberty of Refugees, draws its title from the lyrics of a viral music video, “Spread a Smile,” produced by the global media center of the Church of Scientology in Hollywood: Scientology Media Productions.

Originally published as a paper in the July/August edition of the Journal of CESNUR (Center for Studies on New Religions) the book describes the response of the Church of Scientology to the COVID-19 pandemic.

“Scientology’s immediate reaction to the epidemic was to implement a policy of sanitization and control in its own premises throughout the world, and to switch meetings from in-person to online,” Šorytė writes. She refers to an article on the Church of Scientology in Los Angeles, stating, “due to the early implementation of preventive measures, no member of the large Scientology staff in the city was infected.”

The book includes sections of a bulletin issued by Scientology ecclesiastical leader Mr. David Miscavige in which he quotes Scientology Founder L. Ron Hubbard on how to address an infestation like this: “an ounce of prevention is worth a ton of cure,” to which Mr. Miscavige added, “Well, how about a ton of prevention so as not to require an ounce of cure?”

Once lockdowns began easing, “Scientology started devising ways to help the communities where its Volunteer Ministers were present,” wrote Šorytė. She quotes Bernadette Rigal-Cellard, Université Bordeaux-Montaigne, English and Religious studies Faculty Member, who describes the Volunteer Ministers as “the best-known charity of the Church because of its ministers with their bright yellow jackets highly visible in disaster zones.”

On the cover of Šorytė’s new book is a photo of a team of Scientology Volunteer Ministers wearing these bright yellow jackets over protective jumpsuits as they began distributing educational booklets in Copenhagen, the city that hosts the European headquarters of the Scientology religion.