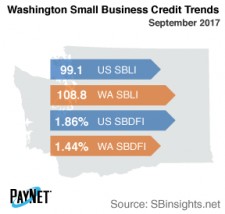 Olympia, Washington, November 21, 2017 (Newswire.com) - Borrowing by small firms in Washington declined and the percentage of firms defaulting on loans worsened in September 2017, according to data published by PayNet.

At 108.8, Washington's PayNet Small Business Lending Index (SBLI) surpassed the national SBLI level (99.1) despite dropping by 2.1% from last month's state level. The index is basically unchanged from a year ago.