Walk in the Footsteps of L. Ron Hubbard With Inside Scientology: Saint Hill 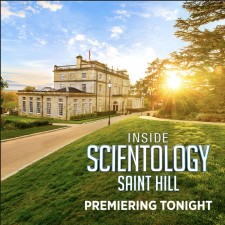 LOS ANGELES, October 21, 2019 (Newswire.com) - ​​Scientology Network’s INSIDE SCIENTOLOGY, the exclusive series that provides unprecedented access to the facilities and behind-the-scenes operation of the Church of Scientology, announces a new episode, Inside Scientology: Saint Hill, on Monday, October 21.

Set amidst 100 acres of the ancient Ashdown Forest are the roots of a global religion. Welcome to Saint Hill. This legendary manor house is located at the prime meridian, in the medieval town of East Grinstead, England. Over the course of its nearly 300-year history, Saint Hill Manor's owners have included landed gentry, the wife of an American diplomat and an Indian maharajah. Then, in the mid-20th century, Saint Hill became home to Scientology Founder L. Ron Hubbard. Here, he lived, worked and made pivotal breakthroughs in the spiritual technology of Scientology, guiding it from a grass-roots movement to a worldwide religion. The manor house, restored to its original magnificence, looks exactly as it did when Mr. Hubbard lived there. From the rare Erard grand piano he played to a darkroom where he developed his photographs, Saint Hill Manor gives visitors a sense of the many facets of his life. In this episode, viewers are given an intimate tour of the landmark site where the global movement was born.

While Saint Hill Manor preserves the Church’s origins, across the property, a modern-day castle serves as a 21st-century church. Inspired by an 11th-century Norman fortress, Saint Hill Castle was conceived and designed by Mr. Hubbard himself to accommodate the ever-growing numbers of people coming to Saint Hill to study Scientology.

Today, thousands journey from all corners of the globe to the pastoral English countryside to celebrate the anniversary of the International Association of Scientologists and support the humanitarian works it sponsors. Cameras capture the jubilant event that is infused with the spirit of Mr. Hubbard.

Gain insight into the life of the Founder of Scientology, explore the roots of a modern movement and visit a magical setting with Inside Scientology: Saint Hill.

The Scientology Network debuted March 12, 2018. Since launching, the Scientology Network has been viewed in 240 countries and territories in 17 languages. Satisfying the curiosity of people about Scientology, the network takes viewers across six continents, spotlighting the everyday lives of Scientologists; showing the Church as a global organization; and presenting its social betterment programs that have touched the lives of millions worldwide. The network also showcases documentaries by independent filmmakers who represent a cross section of cultures and faiths, but share a common purpose of uplifting communities.