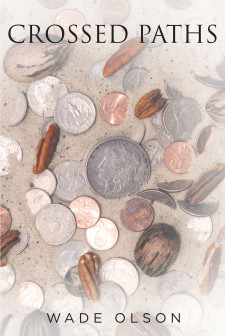 MADISON, Fla., October 21, 2021 (Newswire.com) - Fulton Books author Wade Olson, an article writer for various publications and an inventory and systems administrator, has completed his most recent book "Crossed Paths": a thrilling drama tied with deliberate plans and cunning revenge about bringing back the former glory which is taken away,

Olson shares, "Henry Sayer, a New York City investor with an uncanny knack for making people money, had made it to the top of the financial game, maintaining his reputation of honesty and integrity. He was enjoying that life of celebrity and penthouse high society until less-scrupulous people decided to throw him from his pedestal.

"Suddenly, he found himself scrounging for his very existence in the Deep South, stripped of his envied status and reputation, even his clothes. As he was forced to live life on the lam, hiding from everyone, his only hope was to make his way back home to collect the evidence that would prove his innocence and help him avoid a life of imprisonment.

"It's an uphill battle back to the top, but there's something in store for everyone who crosses his path."

Published by Fulton Books, Wade Olson's book is an intense tale of fighting back against injustice with integrity and rebuilding a second chance at life by first putting the enemies down one by one.

This book also manages to express that injustice only comes from self-indulgence that rejoices in pleasure when one sees a weakness and exploits it to watch them fail. With this unfair nature of humans, this book sheds light that through determination and integrity, justice will prevail in the end.

Readers who wish to experience this riveting work can purchase "Crossed Paths" at bookstores everywhere, or online at the Apple iTunes Store, Amazon, Google Play or Barnes & Noble.

Adrienne Garlen's New Book 'Always and Forever' Holds the Many Adventures and Challenges of Two People Throughout the Storms of Life
Fulton Books - Dec 2, 2021