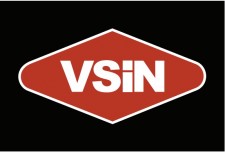 LAS VEGAS, May 1, 2019 (Newswire.com) - ​​​VSiN (Vegas Stats & Information Network), the first media network dedicated to sports betting information, today named media industry veteran Dan Mason as the company’s Chairman. Formerly President and CEO of CBS Radio, one of the most powerful radio conglomerates in the U.S., Mason will work closely with VSiN’s management team to capitalize on the emerging growth and partnership opportunities in the sports betting and media space.

“There are few media executives with both the experience and reputation that Dan brings to the table,” said VSiN founder and CEO Brian Musburger. “He’s already brought invaluable guidance to our team as a senior adviser and investor, and we look forward to having even greater access to his unmatched depth of knowledge and relationships in this industry. We’re thrilled to work even more closely with this consummate leader and better leverage his C-level expertise to build on and accelerate the recent growth we are experiencing at VSiN.”

“Brian and his team have caught lightning in a bottle here. Besides establishing itself on the satellite platform, recently extending its agreement with SiriusXM, VSiN has made tremendous inroads into the OTT space with Sling TV and fuboTV, as well as growing its own subscription offerings. We will now look to further expand our reach across video and audio channels, including terrestrial radio where sports have thrived for decades,” commented Mason.

In more than 15 years as President and CEO of CBS Radio, Mason presided over all functions relating to more than 125 stations across 27 markets, including all of the Top 10, as well as the day-to-day operations of the division.  Mason’s growth strategy included creating and launching CBS Sports Radio, a 24 hour, seven-day-a-week lineup of national programming. The industry veteran was inducted into The National Radio Hall of Fame in 2015 upon his retirement from CBS Radio. That same year, Mason was named to the Billboard Power 100, ranking No. 34 on the strength of his work at CBS and the audience reach he attained during his tenure. He is currently Chairman of The Broadcasters Foundation of America, a charity based in New York that serves the television and radio industries.

The network recently extended its agreement with SiriusXM, where its sports betting content broadcasts 24/7 on a dedicated channel on SiriusXM radios (channel 204) and on the SiriusXM app. VSiN also provides Action Updates -- one-minute news reports with the latest odds -- to more than 100 terrestrial radio stations across the country, including 670 The Score in Chicago, 98.5 The Sports Hub in Boston and KNBR the Sports Leader in San Francisco.

VSiN broadcasts more than 80 hours of sports betting coverage each week from a showcase studio in the middle of the South Point Hotel and Casino in Las Vegas, the equivalent of CNBC being on the floor of the New York Stock Exchange.

Launched in 2017, VSiN (Vegas Stats & Information Network) is the first sports media company dedicated to providing news, analysis and proprietary data to the millions of Americans who bet on sports and make gambling a multibillion-dollar industry. With backing from MLB All Star Ryan Howard and his venture capital firm, SeventySix Capital, VSiN is changing the way people watch and listen to sports.

Fueled by award-winning broadcasters and legendary oddsmakers, VSiN informs and entertains these consumers whenever and wherever they want. Fans can access VSiN content through a dedicated SiriusXM Radio channel (204), fuboTV, Sling TV, NESN, VSiN.com, mobile and social channels.

VSiN’s newsroom studio is located in the sportsbook at the South Point Hotel, Casino and Spa in Las Vegas.

Launched in 2017, VSiN (Vegas Stats & Information Network) is the first media network dedicated to providing news, analysis and proprietary data to the millions of Americans who bet on sports and make gambling a multibillion-dollar industry.