Residents of Rio de Janeiro, Olympians, thousands of volunteers and the Foundation for a Drug-Free World have joined forces to tackle the drug epidemic with a massive multi-media drug prevention campaign. 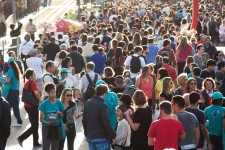 Rio de Janeiro, Brazil, August 21, 2016 (Newswire.com) - ​​​​​​Volunteers are making a difference in Rio—they have distributed a million drug education booklets to the athletes, the international crowd attending, and hundreds of thousands in the slums (favelas) of the city.

While more than 11,000 athletes from 207 nations competed in the Olympics, another contest was taking place in Rio—one that affects the lives of millions of people worldwide.

This competition pitted Olympic contestants and thousands of volunteers against the drug abuse epidemic that endangers every segment of society.

A 2012 survey by the University of São Paulo found an estimated 400,000 Brazilians consume crack cocaine regularly and that Brazil consumes more crack than any other country. Internationally, illicit drugs are a $400 billion industry. In the United States, the Bureau of Justice Statistics reports that more than 17 percent of those in prison committed their current offense to obtain money for drugs.

According to the UN Office on Drugs and Crime, “Every dollar spent on prevention can save governments up to ten dollars in later costs.”

To make a massive impact in Brazil and around the world, the city of Rio backed the Foundation for a Drug-Free World’s efforts, arranging for the Drug-Free World public service announcements to play on the Olympic Live Site screens, reaching some 1.5 million. The city also paved the way for thousands of volunteers who have handed out 1 million copies of The Truth About Drugs booklets since the start of the games.

“To ensure the momentum of this campaign continues far beyond the Olympics, we will provide training and our award-winning Truth About Drugs materials free of charge to any Olympian who is willing to conduct drug education lectures or workshops when they return home,” says Ambra Calzolari, Executive Director of the Foundation for a Drug-Free World. “Every one of them is a champion, simply by qualifying for the Olympics and they are the finest example of what you can accomplish when you live drug-free.”

Drawing on 25 years of experience in drug prevention, the Foundation’s Truth About Drugs program has solved the problem of effectively communicating to teens and young adults the reality of drug abuse, individually and through mass communication.

The Foundation for a Drug-Free World is a public benefit corporation that empowers youth and adults with factual information about drugs so they can make informed decisions to live drug-free.