CLEARWATER, Fla., February 6, 2019 (Newswire.com) - Scientology Volunteer Ministers were honored Jan. 27 at a volunteer recognition banquet at the Fort Harrison in Clearwater. Fifty volunteers who contributed some 30,000 volunteer hours over the past three years were acknowledged for their work.

Among the many outreach activities of the Florida Volunteer Ministers in 2018 was their work to bring help to those affected by Hurricanes Michael and Florence — two of the worst storms ever to pummel the East Coast.

Hurricane Florence struck Sept. 14, flooding North and South Carolina and Virginia communities with as much 35 inches of rain in four days — more than 10 trillion gallons of water.

“One family we helped lived in a home not far from a river,” said a Volunteer Minister who responded to Florence.” They had over eight feet of water and lost absolutely everything. They were an older couple, the wife was undergoing treatment for breast cancer, the grandmother lived with them and was 87 years old. They were lucky enough to get out as the river rose before it washed out their road. We arrived to help the man, named Roger. When we got there, he was exhausted and apathetic. A normally bright and cheery man, he rebuilt race cars for a passion and had lived in his home for 30 years. They had already endured two floods in the last 10 years and had always re-built. They had no flood insurance, a common occurrence in these areas, and no real way to get help.

“We arrived with over 30 VMs and started to help him with the heartbreaking process of removing a lifetime of destroyed belongings, and ripped out flooring and drywall before life-threatening mold could take hold. He was solid, apathetic and stuck in the shock of the incident when we started.

“By the end of the day, he had slowly brightened up and was talking, smiling and joking with us. He kept repeating ’I can’t believe you are here’ throughout the day. As we were packing up to leave, he told us that when he returned to the house for the first time the night before we arrived, he walked in and felt an enormous feeling of overwhelm. He didn’t know how he would ever get through it alone, he had no one to turn to for help, he thought there was nothing that could really be done about it. He said he just cried and sat down on his front porch. He felt so caved in, he began to think about ending it all. He decided he was going to pray to God — it was the only thing he knew to do. He prayed for help and for a ray of sunshine. The next morning, he got a call from his pastor that a group of Scientologists was coming to help him. When we arrived in force wearing bright yellow shirts, the color of sunshine, he said all he could think was 'goddam, thank you, God, I didn’t realize you would be so specific.'”

Less than a month later, with VMs still providing relief in the Carolinas, Hurricane Michael rampaged through the Florida Panhandle and up through Georgia. VMs who responded gained an entirely new perspective on the toll a hurricane can take on a region. Michael blasted the coastal community, destroying virtually everything in its path. Fourteen-foot storm surges slammed into homes, ripping them from their foundations and carrying them away and 155-mph winds cracked and uprooted trees and hurled them across roadways and into nearby buildings.

“There is so much devastation here that we’re going from neighborhood to neighborhood to clear roads by chopping off fallen trees and clearing them,” tweeted one of the volunteers, who said that Panama City was in shambles as were communities for hundreds of miles up and down the coast.

At the awards presentation, Glendy Goodsell, who directs the activities of the Volunteer Ministers of Florida, said those who responded to this year’s hurricanes exemplify the character of the Volunteer Minister, as described by L. Ron Hubbard when he initially developed the program in the mid-1970s: “A Volunteer Minister does not shut his eyes to the pain, evil and injustice of existence. Rather, he is trained to handle these things and help others achieve relief from them and new personal strength as well.

“How does a Volunteer Minister accomplish these miracles? Basically, he uses the technology of Scientology to change conditions for the better — for himself, his family, his groups, friends, associates and for Mankind.” 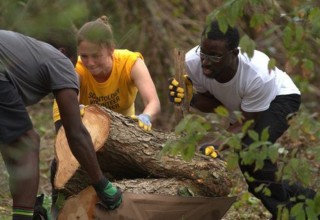 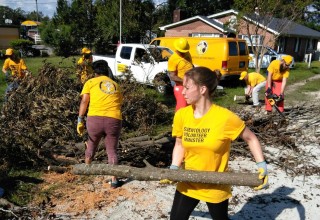 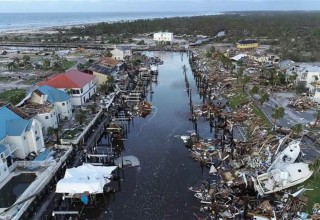 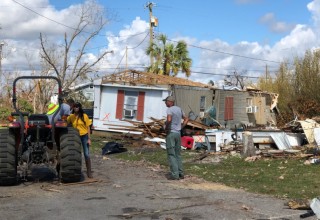