Rivers of mud inundated communities in Southern California. Scientology Volunteer Ministers are helping neighborhoods get back to normal. 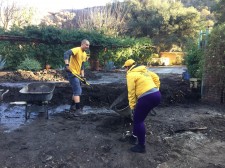 BURBANK, Calif., January 22, 2018 (Newswire.com) - Hillsides burned by the massive La Tuna Canyon Fire in Burbank, California, three months ago, were pummeled by heavy rainfall last week. The downfall saturated the scorched and loosened soil, creating rivers of mud that cascaded down on the communities below, sweeping away vehicles and trees. It also toppled power poles knocking out electricity in the area.

Scientology Volunteer Ministers have been helping residents, including an 88-year-old woman who lives by herself, dig out their homes and vehicles.

The Church of Scientology Volunteer Minister program is a religious social service created in the mid-1970s by Scientology Founder L. Ron Hubbard.

Scientology Volunteer Ministers respond to disasters great and small, in their neighborhoods and in countries around the world.

Their motto is that no matter how serious the situation, “Something can be done about it.”