A volunteer from Pakistan is training university students and emergency personnel in Jakarta on techniques to help Indonesians recover from recent disasters. 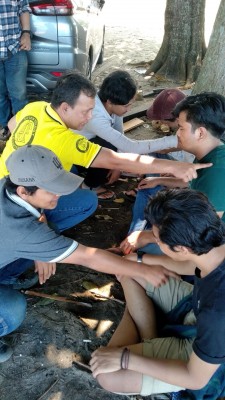 JAKARTA, Indonesia, January 15, 2019 (Newswire.com) - As 2018 drew to a close, Indonesia was reeling from the last of nearly 2,000 disasters in the previous 12 months. Tsunamis, earthquakes, volcanic eruptions, flooding and mudslides killed thousands and left hundreds of thousands homeless.

Catastrophes are common in this island nation, the natural consequences of living on the Ring of Fire at the intersection of three major continental plates.

To reach out to the people of the country in the aftermath of its most recent disaster—the  December 22 tsunami triggered by the eruption of the Anak Krakatau volcano—Mr. Perwaiz ul Hasan, director of the Dianetics Assist Team of Pakistan, traveled to Java to train emergency personnel and university students on Scientology assists—techniques from the Scientology Handbook developed by Scientology Founder L. Ron Hubbard. Assists help relieve suffering and are frequently used by first responders to help those affected by disasters.

For two decades, ul Hasan—who was awarded the International Association of Scientologists Freedom Medal in 2012 for his years of service, compassion, and care—has helped hundreds of thousands in Pakistan recover from devastating floods and other natural disasters.

Ul Hasan is conducting workshops in Jakarta on how to help those injured in times of disaster through use of the Touch Assist.

The Scientology Handbook contains 19 courses including how to deliver Scientology assists, improve one’s ability to study, resolve conflicts and relationship and marriage difficulties and raise happy and self-reliant children. All Volunteer Ministers courses are available online free of charge for anyone wishing to learn skills to improve their own lives and help others.

In creating the Volunteer Ministers program, L. Ron Hubbard wrote: “If one does not like the crime, cruelty, injustice and violence of this society, he can do something about it. He can become a Volunteer Minister and help civilize it, bring it conscience and kindness and love and freedom from travail by instilling into it trust, decency, honesty and tolerance.”