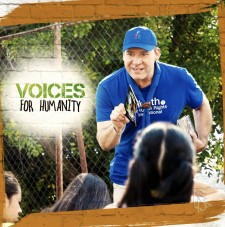 Costa Rica is the picture of idyllic natural beauty. But beneath the surface, it’s a land of unnatural suffering, with nearly a quarter of the population in poverty and children as young as five sold into human trafficking. Exposing the problems plaguing Costa Ricans and restoring hope for a better tomorrow is Braulio Vargas, leading a nationwide human rights awareness movement.

A native of San José, Costa Rica, the way Braulio Vargas tells it, he was deprived of his childhood when his older brother was gunned down. Determined to make a difference on behalf of his sibling, he put himself through school and became a lawyer. While fighting for the rights of his clients, he became increasingly aware of the rampant human rights abuses infecting his country. Beginning in 2014, Braulio partnered with Youth for Human Rights, embarking on a campaign to educate the public and the entire nation on human rights — from farmhands to kids, whether attending school or living on the streets. Braulio’s drive to infuse human rights into Costa Rican culture scored big when the national soccer federation joined his team, promoting human rights on a massive scale. To date, Braulio and his human rights advocates have educated over two million Costa Ricans on their human rights.