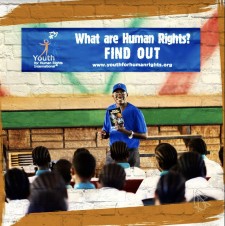 For over two decades, the people of The Gambia suffered under a brutal dictatorship. In the year 2000, government soldiers fired live ammunition into a crowd of student protestors, ending a dozen young lives. Thereafter, Nfamara Jawneh took it upon himself to spread the message of human rights, a campaign now credited with helping usher in a new era of democracy in the country.

Nfamara Jawneh was born in a remote village in The Gambia with no access to formal education. When, at the age of 11, the first Western school in the area opened, he immediately volunteered to attend. Excelling in his studies, he was awarded a scholarship to study journalism in Germany. While still in school, Nfamara founded a human rights organization called “Beakanyang” (“Equality for All”). Despite risks of reprisals from The Gambia’s notorious dictatorship, in 2015 at the United Nations he courageously delivered a speech calling for human rights on behalf of his countrymen. Then, in 2016, seven political parties in The Gambia united to oust the dictator. Partnering with Youth for Human Rights, Nfamara continues to work tirelessly across The Gambia and internationally, training and educating tens of thousands of students on their human rights. Nfamara Jawneh currently serves as the president of the Young Journalists Association of The Gambia as well as continuing his community development and human rights work with Beakanyang. ​

The Scientology Network debuted March 12, 2018. Since launching, it has been viewed in 240 countries and territories in 17 languages. Satisfying curiosity about Scientology, the network takes viewers across six continents, spotlighting the everyday lives of Scientologists, showing the church as a global organization, and presenting its social betterment programs that have touched the lives of millions. The network also showcases documentaries by independent filmmakers who represent a cross-section of cultures and faiths, but share a common purpose of uplifting communities.

Broadcast from Scientology Media Productions, the church’s global media center in Los Angeles, Scientology Network can be streamed at Scientology.tv and is available through satellite television on DIRECTV Channel 320, mobile apps and the Roku, Amazon Fire and Apple TV platforms.