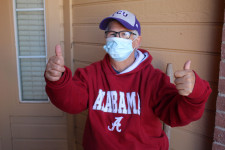 FORT WORTH, Texas, March 2, 2021 (Newswire.com) - As a result of the recent severe winter weather, many Texans learned first-hand what it's like to deal with long power outages in freezing cold weather. Some also had the misfortune of a freezing pipe bursting. Now imagine experiencing both in the only home you've known for years as a person with developmental disabilities.

Richard Kemp, a 21-year veteran employee was on duty that night at Pamela House, a Volunteers of America Texas group home for individuals with intellectual and developmental disabilities. "The lights went out and it got really cold. The clients started shaking," he said. "They wanted to know when power would return and what we were going to do."

Richard moved the housemates to the van in the driveway so they could warm up as he contemplated his next move. Local hotels were booked from other residents seeking power and warmth, but he had been lucky. "I knew there was power, water and heat at my house so I told [my supervisor] they can come stay with me."

Which is how it came to be that Richard hosted residents in his own home, cooking three meals a day for an entire week (reportedly more than he had ever cooked before!). "He made pork chops, chicken, green beans, spaghetti, pizza and oatmeal," recounted Jeff, a resident of Pamela House. Of the experience, he remarked, "I'd never seen anything like it."

Richard even slept on the floor, moving his daughter into his own bed while Jeff and his housemate occupied the other rooms. Richard said, "It was crazy, but I'd do it again. I love those guys." Must be why he treated them like family.

Update: During this time, a pipe burst at Pamela House destroying the interior, so residents have been moved to another group home while the property is gutted and repairs are made, a process estimated to take two to three months.