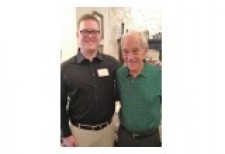 Phoenix, AZ, June 15, 2017 (Newswire.com) - Vladislav Matveyev, a graduate student in political science in the United States, is particularly interested in U.S. relations with Russia. He notes that Russia has gone through tremendous changes over the past quarter century since the dissolution of the USSR. Aside from that, there have been various other major political events and international conflicts, many of which had Russian involvement. The current Syria crisis is a primary example of this. In 2013, then-President Barack Obama wanted to take military action against President Assad of Syria. However, following negotiations with Russian President Vladimir Putin, the plan was halted and chemical weapons were instead removed from Syria. It was this in particular that led Matveyev to gain an interest in international conflicts.

Interestingly, Matveyev was initially a business student. Global events like the 2013 decision not to go to war with Syria and the 2014 annexation of Crimea by Russia showed him that his actual interest was in politics, particularly international affairs. He then made the decision to develop a career in international affairs, so he shifted his studies from business to political science.

International order and peace-keeping efforts now lie at the center of everything that Matveyev does. He is always at the forefront of new developments in organizations such as Human Rights Watch and the United Nations. To really build on his knowledge, he has accepted a summer internship offer in Russia at a British-Russian company.

Previously, he had the opportunity to meet and discuss politics with former U.S. Representative and medical doctor Ron Paul, founder of the Ron Paul Institute for Peace and Prosperity. This conversation was a huge inspiration for Matveyev. As a result, he has become more committed to developing into a young leader. He joined the Young Americans for Liberty, as suggested by Ron Paul, and it was his guidance that encouraged him to find internship placements that looked specifically at international relations with Russia.

Vladislav Matveyev is becoming an expert on international conflict development. He hopes to use this knowledge to spot any potentially emerging conflict, and put efforts in place to prevent it from escalating. He aims to do this, in particular, through excellent communication and negotiation, rather than through a show of military force. To further build on his skills, he has enrolled in the Negotiation and Conflict Resolution graduate certificate offered by Creighton University. He is hopeful that this will further improve his career and his opportunities to help in improving Russian-American relations.

His meeting with Ron Paul was the pivotal element in his studies. It was his conversation with Dr. Paul that convinced him to shift his career towards conflict resolution. Meanwhile, the graduate certificate program enabled him to learn about dispute systems design, mediation, conflict management, and negotiation techniques and approaches.

With international conflicts becoming increasingly complex, Matveyev hopes to be able to contribute in preventing a second Cold War, or in the worst case scenario, a third World War. Conversations are happening between Russia and the U.S., as well as between Russia and the United Kingdom, but Russia is equally having conversations with Syrian President Assad and other powers that are traditionally not the allies of the U.S. and the U.K. The world, as a result, is on tenterhooks, not in the least because of other changes in the political climate. These include the election of President Donald Trump, uncertainties due to a general election in the United Kingdom, and the so-called 'Brexit Negotiations.'

Vladislav Matveyev realizes that what Dr. Paul has been able to do for him is make him see that there is actually no 'Russian problem.' Rather, there are political problems and power plays between various governments as well as internally in the U.S., between Democrats and Republicans. There seems to be playground bullying going on between the various countries, shown, for instance, in the banning of Russia from the Olympic Games and President Putin's response of simply organizing his own games just for Russians.

Interestingly, following his studies, Vladislav Matveyev believes that the root cause of the problem was the overthrow of Viktor Yanukovych as President of Ukraine by the U.S. in 2014, which changed the Eastern European political landscape. Rather than strengthening relations with Eastern European leaders, it provided an opportunity for the Russian president to annex Ukraine. According to Matveyev, the U.S. considered this move by President Putin as a personal insult. Thus, the U.S. fails to find a resolution of conflicts with Russia because of feelings of spite, which is in turn reciprocated by the Russian president. Communication and mediation, therefore, are key.