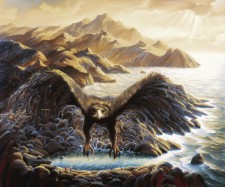 LAS VEGAS, March 18, 2020 (Newswire.com) - Kush Fine Art Galleries and the creator of Metaphorical Realism, Vladimir Kush, are proud to present his New Release "Heavy Prey", Limited Edition on Canvas, Edition 100 (Size 35" x 41")​. The Eagle is one of the most important symbols of the sun and sky gods. It is associated with greatness, power, victory, and bravery. In ancient Greece, the eagle was the messenger of Zeus. As believed by ancient people, the eagle flies higher than any other bird and unblinkingly looks at the sun. What bird could possibly better associate with the god that hurled lightning bolts toward the earth? Sometimes the eagle held in its talons Zeus's thunderbolts. In one myth, Zeus's anger materializes into an eagle and pecks at Prometheus's liver. With this is associated the mythical/poetical precepts of transforming people into animals. This laid the foundation for the metamorphoses of Publius Ovidius Nasso. Zeus himself, as it is known, changed into the forms of a bull (kidnapping of Europa) and a swan (history of poor Leda). ​

​​Zeus located the sacral center of the world with the help of eagles. Two eagles, one sent from the east and the other from the west, met in Delphi. In memory of this, in the middle of the Delphian temple, a marble sphere was built with two golden eagles at its sides. King Antioch built an unusual memorial in the sharp of an eagle and two lions, which was intended to remind all of the gods' greatness and his greatness. Now, the royal guardian of the sky can be seen in Nemrut Dag, a mountain near the village of Karadut in the province of Adiyaman, Turkey. Often, the eagle was illustrated holding a snake in his beak, which represented the union of the sky and the earth. The artist depicted the eagle holding a fish in his talons, which symbolizes the unity and antagonism between the sky and the water. In an earlier work, the fish still swam in the lake, but now it flies toward the sky.

Kush explains: "Most people would probably say that metaphor is about wordplay, verbal expression, but it is as much about thinking and visualizing, about the way your brain works. When we say time is money, our minds have already made that unusual connection and produced some sort of mental picture. So when we talk about saving time or wasting time, we are speaking metaphorically. All of our lives, everyday experiences revolve around metaphor: we do not live by facts, but by symbols and their meaning. Remember that song “Love is All Around?” Well, the same is true of metaphor. You only have to start noticing and that miracle of connection is everywhere."

Kush's work can been seen at Kush Fine Art Galleries located in Las Vegas, Maui and Laguna Beach and on his website www.vladimirkush.com. For more information, contact us at info@vladimirkush.com. 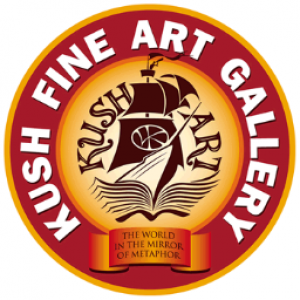