SUNNYVALE, Calif., May 22, 2020 (Newswire.com) - ​​​​​Visbit, the leading immersive media technology company, today beta launches two new products—Visbit Lite and Visbit DeepSmooth—to enable 60FPS experience for high-resolution VR videos. Visbit Lite, including an encoder and a player, is a free toolset designed for local encoding and playback of up to 6K stereo 60FPS VR videos. Visbit DeepSmooth, powered by deep learning technology, can artificially increase a VR video’s frame rate to 60FPS or higher. With this launch, whether VR videos are shot at 60FPS or 30FPS, Visbit can now provide a complete solution to process and play them at 60FPS for a much smoother and significantly improved viewing experience.

60FPS playback support has always been a top request from 360 videographers. “The visual differences between 30FPS and 60FPS can be obvious when there are camera motions, a fast-moving object, or anything close to the camera present in a scene. Such differences are greatly magnified in VR because of the large screen in front of your eyes. The insufficient frame rate also results in motion sickness and ghosting effects. Playing at 60FPS is an effective way to solve these problems, and in VR you need to achieve 60FPS without sacrificing the resolution. Thus, we further improved our VVOS® algorithm to overcome this frame rate constraint,” said Dr. Changyin Zhou, Co-Founder and CTO of Visbit. Today, Oculus Go and Quest have a hardware decoding limit of 5.7K mono (5760*2880) or 4K stereo (4096*4096) at 30FPS. With VVOS technology, Visbit Lite breaks through those limitations and can encode and play VR videos up to 6K stereoscopic at 60FPS on Oculus Quest, Oculus Go, and Pico G2 4K.

Working as a pair, Visbit Encoder Lite converts VR360 or VR180 videos from MP4 or MOV format to VVOS format on a desktop, and Visbit Player Lite plays the converted VVOS file on a VR headset, both running locally with the resolution up to 6K stereo 60FPS. “We designed this toolset mainly to facilitate content creation. We named it Lite because we’d like to offer this toolset totally for free for non-commercial use. We will also bring 60FPS capability to our commercial products and achieve 8K 60FPS in the near future,” said Dr. Changyin Zhou. As a beta release, Visbit Encoder Lite currently only works with Windows system, and Visbit Player Lite firstly only supports Oculus Quest and Go with Pico G2 4K to be added very soon. More devices will be supported as the product evolves.

Jon Griffith, the producer of Everest VR, has test-used Visbit DeepSmooth and highly recognized this technology. “I’ve wanted to start working with higher FPS capture for a while, but to move away from a 30FPS capture and post workflow in VR is an incredibly complex and expensive step, and most players could not handle anything higher anyway. DeepSmooth removes all that headache. I can still shoot and work in post at 30FPS and, in the end, convert to an incredibly fluid VR experience. I’ve always been a huge fan of what Visbit has accomplished for high-res playback, but this takes it to a whole new level. It’s a big leap forward for realism in VR,” said Jon Griffith. Another testing user Eric VIDAL, Founder and Producer from Kariba Productions, also commented: “The visual comfort and the precision of the actions in movement become so realistic with this new algorithm. Thanks to Visbit for their efforts to make the immersive experiences breathtaking.”

Taking this opportunity, Visbit renames its existing product Visbit VR Theater to Visbit Pro for Business, briefly Visbit Pro. Unlike Visbit Lite, which is a free product designed for non-commercial use, Visbit Pro is positioned to offer a premium cloud-powered system for business users to manage, deploy, and play up to 12K resolution 360 or 180 VR videos with advanced functions and playback modes. Visbit Pro offers a 14-day free trial and monthly or yearly plans tailored for various commercial use cases such as exhibiting, marketing, employee training, and education. 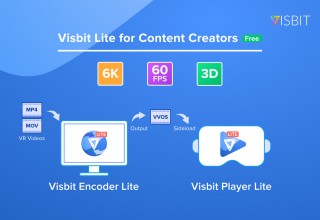 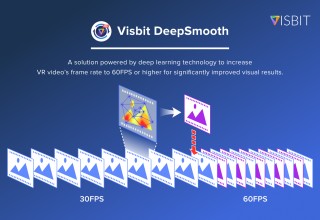