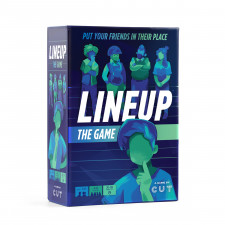 SEATTLE, June 7, 2022 (Newswire.com) - Cut.com., Inc, a digital media company based in Seattle, has created a new party game based on their viral hit video series Lineup, a show that puts an ordinary person in the position of having to predict, rank, or guess unusual things about strangers, right in front of them.

After hundreds of episodes exploring topics ranging from silly to the profound - and over 2 billion total views across YouTube, Facebook, and TikTok - Lineup, best known for episodes such as "Match Pet to Person," "Guess What Language I'm Speaking," and "Bartenders Guess Who's Underage," is joining Cut's growing line of home games.

"As our most popular series to date, Lineup was a natural fit for adaptation," says Cut CEO Chris Rudy. "We're excited to launch it as a tabletop game, alongside hits like Truth or Drink, and continue to give our fans an opportunity to experience what it's like to be in Cut videos… right from the comfort of their living room."

Cut is focused on bringing the Internet together, one awkward moment at a time, and their tabletop games division, Cut Games, aims to do the same for players at home. Cut Games creates fun, funny games that spark sincere discussions and lead to lots of laughs.

The Lineup game is launching exclusively on Kickstarter, and the campaign is live now [HERE]. The pre-order campaign will run through July 9, and backers can secure a copy of the finished game, a pack of bonus game cards, and/or other titles from the Cut Games catalog. Lineup is Cut's fourth Kickstarter project, with the company previously raising a combined $464,000 for three previous games in 2018, 2019, and 2021.

Lineup was designed by Cut's in-house games team. Four to eight players can play a round in 30 to 45 minutes. To start, one player draws a card to ask the whole group a question with a numerical answer. All players then create a "lineup" of the others based on how they predict the others have answered, from lowest to highest. The most accurate predictor wins the game!

The questions in the game range from weighty to wacky, and for those looking for an extra naughty game night, a "Not Safe For Work" question pack is also available exclusively via the Kickstarter.

"Lineup is Cut's most popular show, and our game is a great adaptation of its core concept in a way the whole family can play," says Cut's director of product development, David Malki. "The conversations that come out of a game of Lineup can truly be magical. You'll be surprised to discover what your friends really think about you!"

Lineup joins Truth or Drink, Fear Pong, Keep It 100, and TBH in the Cut Games catalog. The Cut games have sold over 150,000 copies to date since their first title, Fear Pong, was launched in 2018.

Founded in 2014, Cut.com has created thousands of videos featuring real people in social experiments where they confront unusual situations, challenges or confessions. Their first viral hit, "Grandmas Smoking Weed For The First Time," has been viewed 34 million times to date. Cut has over 11 million subscribers on YouTube, and was recently named the media company with the #1 highest engagement on TikTok for 2021.