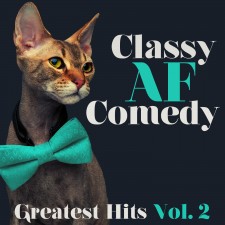 LOS ANGELES, October 2, 2019 (Newswire.com) - Cat Adell, Los Angeles based Comic, Actor, Writer and Producer, best known for her viral sketch comedy video “Mind Your Own F***ing Business” (https://www.facebook.com/watch/?v=2932434276788043) with over 150 million views across platforms, announces the launch of her digital record label Classy AF Comedy and the first release, “Greatest Hits Vol 2”. Included on the album as a bonus track is an audio version of her viral video.

Cat has produced and performed in over 18 monthly stand up comedy performances of Classy AF Comedy. The show has featured more than 100 comics and focuses on the comedic voices of Women, POC and members of the LGBTQIA+ community. Now, Classy AF Comedy has expanded the brand and services to our community of comics by bringing the funniest live recordings from the show to streaming services all over the world.

Grey Griffin is an accomplished voiceover actor, You may know her as the voice of Daphne on Scooby Doo. Her amazing voice can also be found on “The Loud House,” “Kim Possible,” and probably all of your favorite animated series.

Cat Adell has appeared on the curated homepages of Funny Or Die, World Star hip Hop, NowThis!, DailyKos, in the feature film Yamasong and will appear on Jim Carreys “Kidding” on Showtime this coming season.

Lynn Stein is an LA-based comedian and writer. She has appeared at the SF Sketchfest, Out of Bounds Comedy Festival, the All Jane Comedy Festival and many more.

The Album is available at the following outlets and many more…​​