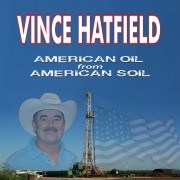 NASHVILLE, TN, March 15, 2016 (Newswire.com) - ​American Oil From American Soil the title of the newest release from Texas singer/songwriter Vince Hatfield. Vince was born in the rich oil area of Snyder, Texas near Midland, Texas. His first job included cleaning the inside of old oil tanks. It was these roots that helped him put his heart into his newest release. Working in the oil industry, Vince understands what it means to work hard and how primarily the Saudi's manage to manipulate the oil industry at least once every decade by flooding the markets with their oil. When the USA starts to become closer to being energy independent from imports, this causes all the working men and women in the oil industry here in the United States to suffer severely. He felt he needed to express the frustration that not only he feels, but also and especially for all those hard working men and women of the oil industry and the effect it has on all those families across America.

Vince has a unique way of always coming up with an unassuming outlook-qualities that make his songs so relatable for so many listeners. It is with that same dedication which is what has gotten so many of the songs he has recorded played on the radio stations. That same dedication allowed Vince to attract the attention of A-list session players in Nashville, TN. He has had over 35 charted successful singles on the New Music Weekly Charts, Cash Box, and Music Row. He has also won the prestigious New Music Weekly's Break-Out Artist of the year and also the Country Male Artist.

"We have such a wonderful Country, and we need to keep America free."
JUDY ADE

With the challenges of his oil career and music career, Vince still makes time for his other passions, such as hunting and fishing. He also takes the time to give the rest of us some great music. His latest release American Oil From American Soil is starting to get the attention it deserves and maybe people will start thinking. As Vince says, "We have such a wonderful Country, and we need to keep America free." Although Vince's song American Oil From American Soil, mentions only the West Texas rigs and oilfield, he wishes to point out that there are now many other oil producing states that also suffer from these ongoing downturns of the oil industry, which occur much too often.

You can look for more great songs in the future by Vince. He continues to evolve with every song he releases. For more information visit http://www.vincehatfield.com