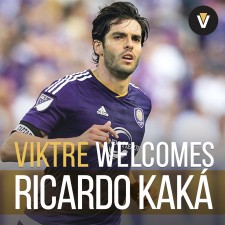 Developed to showcase the life of an athlete, VIKTRE provides a multi-faceted network and community for professional athletes to connect on a more personal level with their fans. The platform features two interfaces: One for fans to interact with their favorite athletes via exclusive content, and one for professional athletes of all levels to interact with each other in a private, peer-to-peer setting.

“VIKTRE's unique way of communicating with fans and athletes allows me to tell my personal stories — about faith, family and my commitment to giving back — all in my own voice and from my distinct point of view," said Kaká.

“VIKTRE is all about embracing and celebrating the life of an athlete, on and off the playing field. Kaká is a global icon, and now his fans can access his stories in his own Point of View on VIKTRE,” said Al Steele, CEO and Chairman.

On top of his team accomplishments, Kaká has been recognized as one of world’s most prestigious players, receiving the 2007 UEFA Best Player in Europe, FIFA Ballon D’or, 2007 UEFA Champions League Top Scorer, 3X Player of the Year, 2X Footballer of the Year.

The platform is available to users via the web, mobile apps, handheld devices with VIKTRE.tv, and VIKTRE Live, coming soon.

"VIKTRE is the content publishing platform of choice for the world’s greatest athletes.  With more than 1,000 athletes representing 250 million social media followers globally, VIKTRE is the source for all stories an athlete should tell.

VIKTRE Selected as One of the Top 10 Finalists by the HYPE Jury Alongside the UEFA Champions League Final
Viktre - May 31, 2017
Newswire