Steve Trammell created the six eagle statues as a way to honor and remember U.S. military heroes, wars and tragedies in history. 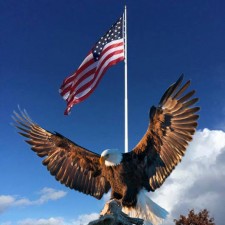 ​ANDERSON, Calif., May 29, 2018 (Newswire.com) - Vietnam Veteran Steve Trammell, CEO of Eagle Iron Works, was moved to honor and remember military heroes 26 years ago. In 1992, Trammell created his first brass eagle, which was named “In the Belly of the Eagle.” The sculpture honors fallen Vietnam soldiers. Today, Trammell has a series of six eagle sculptures. He was inspired by the eagle symbol of the U.S. National Defense Service Medal and so his sculptures take on a similar look.

Trammell was a U.S. Army combat soldier in the late 1960s. He witnessed first-hand the tragedy of the Vietnam War and the tremendous loss of human life, including that of friends. Trammell refers to the Vietnam War as “his war” and will explain that while he wasn’t wounded, he nearly died from malaria contracted in the jungle. He is grateful for the helicopter pilot that risked his own life to dip into the jungle to pull Trammell’s almost lifeless body out. A few years ago, Trammell also had major surgery to remove a tumor, a result of Agent Orange, on his left knee.

“When I was creating the first eagle sculpture, I was able to release a lot of pain from my own experiences in Vietnam. For me, these eagles are the perfect way to honor and remember all those who made the ultimate sacrifice,” says Trammell.

After finishing his first sculpture, Trammell continued on. The second eagle Trammell created honors his family friend Airman 1st Class Joshua Woody and 19 others of the U.S. Air Force's 440th Wing (Provisional) who were killed when a truck bomb exploded near building 131 at Khobar Towers in Saudi Arabia on June 25, 1996. The third in the series is dedicated to the 52 U.S. Elite Special Forces lost in Mogadishu, Somalia, during “Black Hawk Down” in October 1993. The fourth brass eagle stands proudly at five feet tall with spread tail feathers honoring the fallen Army, Air Force, Navy and Marines personnel lost in the Korean War during 1950-1953.

The fifth in the series is a seven-foot-tall brass eagle weighing in at 1,200 pounds. This is dedicated to all of the 241 service personnel including 220 Marines who were killed during the Beirut barracks bombing on October 23, 1983. This is noted as the deadliest attack against U.S. Marines since the battle over Iwo Jima in February 1945.

The final eagle in the series is a nine-foot-tall stainless-steel eagle. The sculpture is lighted from within throughout its entire body including the wings and head. This eagle has not been dedicated to any specific war. Trammell hopes that its new owner will find a final place of honor for it to reside. Trammell will also create a plaque of choice for this memorial.

The eagle sculptures have traveled thousands of miles on display at various events. Now that Trammel is semi-retiring, he’d like to find more permanent places for them to reside like at one of the U.S military academies, the Smithsonian or in one of the nation’s military cemeteries such as Arlington National Cemetery, Golden Gate National Cemetery or the National Cemetery of the Pacific. Trammell is also open to groups who might like to continue to promote these memorials by bringing them out on tour. Trammell has offered to deliver the eagle sculptures to their new owners for free if within 1,500 miles of Eagle Iron Works in Anderson, California.

For further information about the purchase of the eagles in the full series of six or individual eagles and commissioned pieces, contact Carole Ryan, project manager, at 530-410-3734 or contact Eagle Iron Works at 530-365-1078 and email: majesticbrasseagles@gmail.com.

Steve Trammell is a Vietnam veteran and CEO of Eagle Iron Works. He created a series of six eagle sculptures in honor and memory of U.S. military heroes, wars and tragedies. 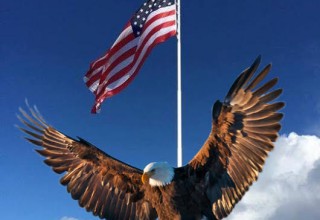 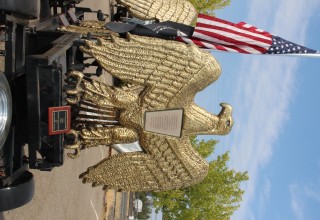 Steve began his Series of Six Eagle sculptures some 22 years ago. The first Brass Eagle honors our U.S. Military Heroes who lost their lives in "Vietnam" bearing many of the names listed "In the Belly of the Eagle"