Public Law No: 115-15, Vietnam War Veterans Recognition Act of 2017 designated March 29 as the official day to recognize Vietnam Veterans and their service to Country. In that spirit, FACES OF VIETNAM will be on exhibit 11 a.m. to 5 p.m. March 20-22, 2020, at the Shepherdstown War Memorial Building in Shepherdstown, West Virginia. 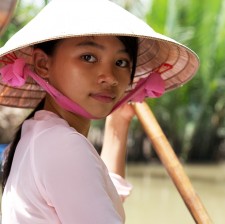 SHEPHERDSTOWN, W.Va., March 6, 2020 (Newswire.com) - In 1969 as a high school senior, Vietnam Vet Kimo Williams always thought Vietnam was a third-world backward gloomy environment. Once there, he realized it was nothing like that at all. The country had beautiful landscapes and majestic flowing rivers. The non-combatant Vietnamese were warm, cordial and very friendly. He relished the opportunity to engage with the people and the culture. However, because of the nature of his presence there, a cultural investigation was very limited.

He left Vietnam in the fall of 1970, never having had the chance to understand the Vietnamese and their culture or to embrace the beauty of the land.

In 1998, Kimo returned to Vietnam for the first time, specifically to the place of his first assignment in Lai Khe. From this cathartic return, he realized what he missed as a soldier and wanted so much more. He returned in 2000, 2001, 2005, 2007, 2008 and 2010. During each trip, he had his camera with him and captured the faces of those he encountered, which provided the essence from his perspective of who this culture was.

FACES of VIETNAM is an exhibit of those photographs.

Kimo will be performing on guitar and vocals the music of Jimi Hendrix. The music of Hendrix inspired him to pursue art as a form of self-expression.

Hi-res images, biography and other press material relating to exhibit available at https://drive.google.com/drive/folders/1SMVhCBDuCCP9Ze2tsShH8w-2bECELn3t?usp=sharing​.

Vietnam Veteran Kimo Williams opened his photography studio and gallery in August 2018 and named it KimoPics.

The Names of Those (a Scrolling Names Memoriam to Those Who Died as a Result of Service During the Vietnam War)
Vietnam Veteran J. Kimo Williams developed and created The Names of Those (TNOT), a video that scrolls names alphabetically by State of every military service member who died due to their service during the Vietnam War. Kimo states that "we should all be cognizant of those who lost their lives in service to country. I want to create a visual representation of those lives and by 2025 have presented TNOT as an art installation in all 50 states allowing the viewer to emotionally connect to the names without any interruption of any kind."
KimoPics - Feb 15, 2021

Vietnam Veteran and Shepherdstown, West Virginia Resident Kimo Williams Exhibits His Portraits of the Vietnamese People He Encountered Upon His Return to Vietnam
KimoPics - Sep 27, 2018