A Hub of American Manufacturing 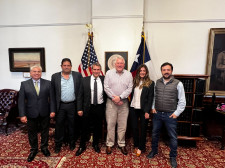 AUSTIN, Texas, May 12, 2022 (Newswire.com) - Valiot leaders and Texas government officials alike see the company's AI-based value chain-oriented software as one that will bolster state growth, reshoring, and its overall GDP. Valiot CEO Federico Crespo and other members of his team met with Texas Secretary of State John Scott at the Texas Capitol on April 27 to discuss the role AI has on Texas' overall economy and manufacturing industries. "Connecting these two huge ecosystems is a unique opportunity," says Valiot CEO Federico Crespo. Government officials, along with team leads at Valiot are optimistic that manufacturing AI will provide benefits to the Texas economy. Bridging the local successes found in Monterrey, Mexico.

Texas manufacturing amounts to 13% of the state's annual output. Officials realize that a preferable reallocation of labor makes the state more competitive for long-run projects in a time of rising costs.

Crespo also met with Robert Allen, CEO at Texas Economic Development Corporation, to discuss the success other manufacturers have had by maximizing the use of AI throughout the value chain. At HEINEKEN, the implementation of Valiot's value chain services produced a significant ROI.

Sergio Rodriguez, VP of Operations at Heineken, adds:  "The people who make the algorithms do not always know where the value in the facility is; Valiot did." Valiot's AI-powered technology helped the Monterrey-based brewery increase throughput while using existing infrastructure to identify and alleviate a production bottleneck at the filtration stage.

Crespo and Texas officials continue to discuss their shared vision for what this technology could accomplish within Texas manufacturing.

About Valiot: Valiot uses AI to unleash the true value of your value chain. It allows for self-regulated and smarter operations. It reduces human reliability and predicts optimal ways for your factory to run. Based in Austin, Texas, the company is continuously analyzing information to predict and fix production behaviors and bottlenecks. Rather than losing time tracking down handwritten manufacturing logs, rescheduling production sequences, and manually entering information into spreadsheets, operators are empowered to streamline and maximize the efficiency of multiple factories at once while having a better overview of the entire value chain.

Solana Users Now Have Access to an On-Chain Social NFT Network Thanks to Holaplex's Social Graph
Follow creators and collectors, get alpha, mint and purchase NFTs
Lightyear Strategies - May 18, 2022