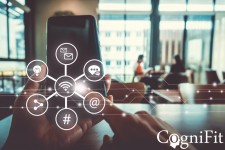 NEW YORK, November 15, 2018 (Newswire.com) - Social media plays a part in daily life. According to the Global Digital Report; in 2018, the number of social media users worldwide is 3.196 billion, up 13 percent year-on-year. From reading world news to contacting people from the past, it has become a routine to check every application available.

CogniFit recognizes the importance of social media. It is constantly engaging the community through different platforms and offers the opportunity to log in its app through social media. This helps users apply social media not only for social purposes, but for business, wellness, and other areas well within the tech world. This constant need to be online has an impact on cognitive skills and emotions.

David Asensio, CogniFit neuropsychologist explains that “although it may seem that social media is mere entertainment, the impact they have on our lives and on our brains is becoming more and more evident. Scientific evidence provides data that may seem contradictory: Social Media may favor and harm, at the same time, our cognitive capacities. Although there is still a lot of research ahead, it is important to use social media in moderation, and perhaps in the future, we can use them for more brain benefits.”

With its 19 years of experience, CogniFit; a leader in cognitive tests and training, knows the importance of cognitive skills in daily life. Social media can aid or hinder certain cognitive skills; however, constant training is important for neuroplasticity, which is the capacity of the nervous system to change its structure and its function over a lifetime. CogniFit scientists explain a list of 6 cognitive skills affected by social media.

As seen above, social media may aid or hinder certain cognitive skills; however, it is important to keep in mind, training other cognitive skills to increase neuroplasticity. Maintaining optimal cognitive skills enhances day-to-day tasks and helps prevent cognitive decline related to aging.

CogniFit's patented technology has been designed by an international team of scientists, neurologists, and psychologists who investigate and combine the latest discoveries on the brain with advanced adaptive algorithms and big data analytics. For nearly 20 years, CogniFit has been developing personalized brain fitness programs with leading scientific institutions and published its results in several peer-reviewed publications.