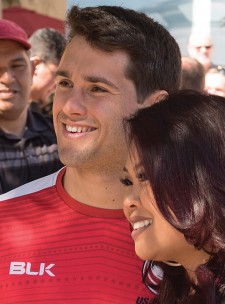 On Saturday, June 3rd, the three stars of the United States national team that competed in the 2016 Olympics in Rio will join in a 45-minute question-and-answer session at 1 p.m., followed by an autograph session on the main stage of the Fan Fest outside Talen Energy Stadium. Hughes, the team captain, along with Barrett, Baker and their coach, Friday, will discuss their Olympic experiences, training regimens, the experience of playing in the HSBC Sevens World Series, and what it takes to perform at the highest level of rugby. The Q&A will be moderated by Pat Clifton of Rugby Today.

On Sunday, June 4th, coach Friday is joined by the trio of Hughes, Barrett and Baker for a clinic focused on “Attacking,” showcasing key tactics and strategies when moving the ball in attack positions. The exclusive clinic will be held on the Academy Field outside Talen Energy Stadium from 11:20 a.m. to 12:20 p.m.

“We aim to provide players with an insight and understanding of the attacking framework that the USA Men’s 7’s team executes when playing on the HSBC Sevens World Series,” said Friday. “We will break down the various components within the framework, and then piece them back together so that the players can utilize the entire pitch and move the ball efficiently and effectively side to side to try and manipulate a defense. We will look at a number of areas such as depth, compression, realignment, triggers, as well as how we look to manipulate the space on the outside to recycle/regenerate possession to move the ball to another area of the pitch.”

Held annually the first weekend in June, the Penn Mutual Collegiate Rugby Championship is the largest gathering of men’s and women’s collegiate, and boys and girls high school, Rugby Sevens teams in the world. Since 2011, the World’s Largest Rugby Festival has been held in Philadelphia at Talen Energy Stadium, and each year attracts over 30,000 fans watching and enjoying the Olympic sport of Rugby Sevens. Televised annually on the NBC Sports, the Penn Mutual Collegiate Rugby Championship serves as a traditional season-ending celebration for collegiate rugby competition in the United States. Additional information is available at http://www.usasevenscrc.com.