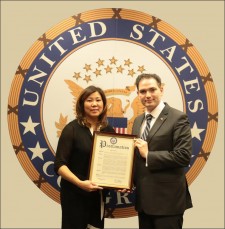 New York, NY, February 3, 2017 (Newswire.com) - November 12th has become a historical day for the Indian-American community as one of their own was honored on two big platforms. It’s a day of double honor for Dilip Chauhan, a South Asian American of New York, and a day of pride for the entire South Asian community.

On Sunday, November 12th, the US Congress dedicated November 12th as the “Dilip Chauhan Day" from the 6th Congressional District in New York. The decision was announced by United States Congresswoman Grace Meng from Sixth District. Ms. Meng is the first Asian woman to become a congresswoman in New York.

Said Congresswoman Grace Meng, ”Dilip Chauhan is an outstanding community leader within the State of New York. His Presentation, Gateway to South Asian American Community of New York has educated many elected officials about the community including Members of Congress, State Senators, Assembly Members, Public Advocate and other legislators from New York State in last ten years. I am honored to recognize our beloved community leader, Dilip Chauhan. I thank him for his invaluable years of diligent and noble services to residents of New York and fellow Americans.”

"I am humbled on receiving such honors on this day, from Congresswoman Grace Meng for declaring November 12, 2016 as "Dilip Chauhan Day" in Sixth Congressional District in New York, I am earnestly grateful for the recognition I have received for my work.  I sincerely thank my parents for inculcating high values and inspiring me all these years with spirit of community service.  I also sincerely want our community members 100,000+ South Asian American Americans living in the State of New York to participate in civic duty such as “register to vote”.  I also urge small business owners to register their businesses, and certify with MWBE Certification, so you can be a part of government contracting process,” said Dilip Chauhan while accepting the honors.  Dilip Chauhan also thanked Congresswoman Grace Meng.

In his current position as a Director of Southeast/ Asian Affairs for Nassau County Comptroller George Maragos’, Mr. Chauhan has made enormous contribution to the Community Relations Department, which provides information and advocacy to residents of Nassau County and helps to increase responsiveness and resolve problems that impact the quality of life for individuals and families. An advocate of "voter registration" drive amongst South Asians, Dilip has also been a bridge between the South Asian community, organizations and government officials. Mr. Chauhan is a Honorary Director of Service Now for Adult Service, Inc (SNAP). Declaration of "Dilip Chauhan Day" by US Congress is a well-deserved honor for a man who has dedicated his life and work to the welfare of the community.

Board of Director - Service Now for Adult Service, Inc (SNAP)