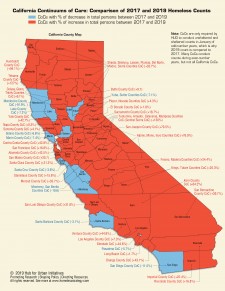 PASADENA, Calif., September 12, 2019 (Newswire.com) - “Ending homelessness in California will require all cities and counties to have plans for creating not only affordable housing, but permanent supportive housing,” says the Hub for Urban Initiatives, a nonprofit that helps shape local California housing plans and writes HUD grants for several southern California cities and counties resulting in tens of millions of dollars in funding each year for affordable housing.

“The state is offering $165 million in non-competitive funding to create those plans, meaning funds are guaranteed if jurisdictions apply and meet grant guidelines. As of today, though, only 58 of California’s 538 cities and counties have completed applications for the all-but-guaranteed funding. Another 72 have begun applications; 408 have not begun at all; and time is running out.”

According to a map created by the Hub for Urban Initiatives for https://HomelessStrategy.com, more than three-fourths of California continuums of care counted more persons as homeless in 2019 than 2017.

Assembly Bill 2162, signed into law last September, states: “Streamlining and expediting the process of approving supportive housing applications will offer housing opportunities in communities with few or no opportunities to exit chronic homelessness.”

The first step in the process of ending chronic homelessness is for every city and county to have an updated housing element for their general plans.

AB 2162 now requires all housing elements to approve permits for permanent supportive housing “by right,” meaning these buildings will be considered a residential use of property and only be subject to the same restrictions that apply to other residential dwellings of the same type in the same zone.

“The more permanent supportive housing, the fewer chronically homeless persons on the streets. Period,” says Joe Coletti, CEO of the Hub for Urban Initiatives, “Land use by right and funding to build are an unprecedented one-two punch California has never had before. Years ago shelters received land use by right but no funding, so nothing happened. Now we have funding to back up the zoning laws and actually build the kind of housing we need to end homelessness for people who have lived on the streets for years, and who are dying on the streets. But cities and counties that do not have an updated housing element in their general plan will not qualify for the funding to build. If they miss this deadline to get help updating their housing plans they will miss this window of opportunity to save lives and transform their towns and counties. It would be tragic.”

California cities and counties must apply for the grant funding by Nov. 30.

About Hub for Urban Initiatives

The Hub for Urban Initiatives is committed to helping California communities and jurisdictions with strategic research, planning, and policy-making especially related to ending homelessness and extreme poverty.