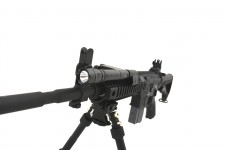 The new line of tactical and weapon lights are designed with the quality and performance Colt customers have come to expect from all of its product lines.  “They are a new standard in portable mountable lighting,” said Tan Woo, lead design engineer for Colt Lights. “Now Colt enthusiasts have an answer for their illumination needs – be it for hunting, training, or law enforcement and security duty. These robustly designed lights can withstand the rigors of daily use while providing superior visibility when environmental light is low to extremely dark.”

Now Colt enthusiasts have an answer for their illumination needs - be it for hunting, training, or law enforcement and security duty. These robustly designed lights can withstand the rigors of daily use while providing superior visibility when environmental light is low to extremely dark.

The Colt weapon light models includes the slim, rail-hugging integral-mount Microtac® MS white light and Predator™ green models. All of the integral-mount models are built with high performance, low-profile bodies and reversible heads and tails for optimal on-rail customization. They are efficiently powered by AA or AAA battery power systems (depending on model) for up to 400 lumens of output. “We wanted to make sure that our mountable lights were recoil-resistant for nearly all hunting rifle calibers,” said Woo. “And for flexibility, we designed them to mount on both Picatinny and Weaver rail systems, so sportsmen can easily use them with their existing equipment.” The light mounting system supports multiple ambidextrous mounting options. Predator™ models ship with both white and green LEDs.

The four new handheld tactical lights offer the same professional grade quality as the weapon light series. Tactical lights include the 1200 lumen high-intensity PeaceMaker® which is powered by four CR123 cells, the 800 Lumen compact slim-line Judge® powered by two CR123 cells, and the AMRAM®  Microtac® AM100 and AM200 Backup Series. “When something goes bump in the night, these handheld flashlights offer the kind of illumination you need to inspire confidence,” says Woo.

Colt’s Manufacturing Company LLC is one of the world’s leading designers, developers and manufacturers of firearms. The company has supplied civilian, military and law enforcement customers in the United States and throughout the world for more than 175 years. Our subsidiary, Colt Canada Corporation, is the Canadian government’s Center of Excellence for small arms and is the Canadian military’s sole supplier of the C7 rifle and C8 carbine. Colt operates its manufacturing facilities in West Hartford, Connecticut and Kitchener, Ontario. For more information on Colt and its subsidiaries, please visit www.colt.com.

Colt Lights is one of the latest product lines in the long and Historic legacy of the Colt Company brand. Our passionate staff of engineers and designers has worked to develop both Integral Mount Weapon Systems and Tac Lights for our latest chapter.